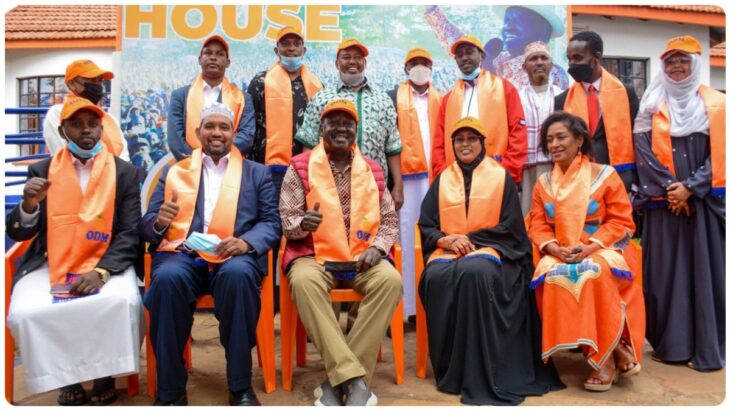 Raila Odinga’s ODM has outsmarted Deputy President William Ruto’s UDA as the most popular political party in Kenya ahead of the August 9, elections. Photo: ODM/Twitter.

The Orange Democratic Movement, ODM, is one of the political outfits that has withstood the test of time.

The ODM party was founded in 2007 by Meru politician Mugambi Imanyara and still exists today, making it one of Kenya’s oldest political oufits.

The party was registered after the 2005 referendum that pitted the orange (NO side) and banana (YES).

The NO side led by Raila Odinga of Liberal Democratic Party (LDP) and KANU’s Uhuru Kenyatta successfully shot down the proposed constitutional changes dealing a blow to the then president Mwai Kibaki, the captain of the team YES.

After the embarrassing defeat, Kibaki sacked his entire Cabinet and later dropped politicians who were against changes to Kenya’s independent constitution.

In the 2007 elections, Imanyara handed over the ODM party to Raila Odinga but remained its secretary for legal affairs until 2011.

After falling out with Mwai Kibaki over unfulfilled promises, Raila Odinga campaigned vigorously against him on an ODM ticket, supported by team pentagon members who included William Ruto, Charity Ngilu,Musalia Mudavadi, Najib Balala and Joe Nyagah.

In the 2007 General Election, ODM bagged a majority of seats in parliament against Kibaki’s Party of National Unity (PNU).

The Electoral Commission of Kenya (ECK) chaired by Samuel Kivuitu declared Mwai Kibaki the winner in a highly contested election, but ODM decried rigging and called for mass action.

This generated post-election violence that led to the deaths of over 1,000 Kenyans, mostly perceived ODM supporters.

The warring sides were later brought together by a mediation team marshaled by former UN secretary-general Koffi Annan.

Raila Odinga and Mwai Kibaki signed a peace accord with the former appointed prime minister.

Raila Odinga, a perennial presidential candidate, is the ODM party leader since it was handed over to him in 2017. He remains ODM’s longest-serving leader.

He has held the position for over a decade now.

Edwin Sifuna was appointed ODM Secretary General in February 2018. He replaced Agnes Zani, who had been holding the position in an interim capacity following the resignation of former Budalangi MP Ababu Namwamba.

The outspoken SG has been at the forefront articulating ODM’s policies while unleashing scathing attacks on opponents.

One can register as an ODM party member by dialling *483*036# and follow due procedures.

Alternatively, they can register on the website by providing their personal details.

During the 2017 General Election, ODM secured 62 seats in the National Assembly, 11 women representatives, and 13 senators.

Its leader Raila Odinga came second to Uhuru Kenyatta in the presidential elections. The poll was nullified by the Supreme Court, but Raila refused to participate in the repeat poll citing a lack of confidence in IEBC.

The ODM Party claims it has over 4.5 million registered members.