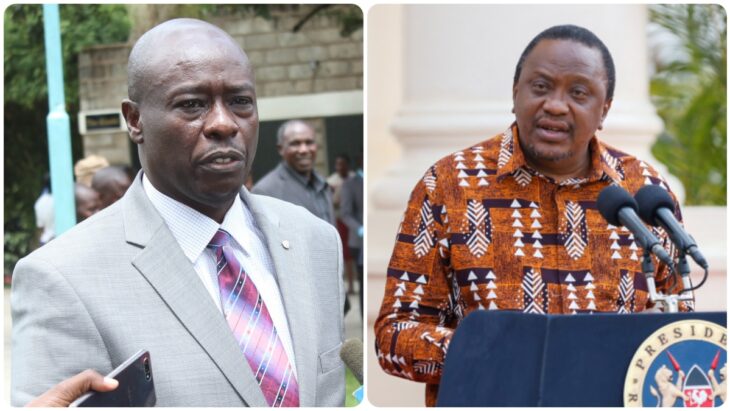 Rigathi Gachagua recently listed a few properties, insinuating it belongs to the Kenyattas.

According to Rigathi Gachagua biography, he is a Kenyan politician currently serving as the Mathira Member of parliament.

The Tanga Tanga allied lawmaker has dominated headlines in the recent past over his political stand, which has made him been loved and hated in equal measure.

Rigathi Gacagua is a first-term MP, having been elected on a Jubilee ticket in 2017. He currently associates himself with the revamped United Democratic Alliance (UDA), a party linked to Deputy President William Ruto.

But who is Rigathi Gachagua? Kivumbi.co.ke looked into his long career.

According to Rigathi Gachagua biography, he was born to Nahashon Gachagua and Jane Kirigo. He is 69 years old.

The politician is the brother to the first Nyeri governor Nderitu Gachagua who died on February 24, 2017, at the Royal Marsden Hospital in London, United Kingdom, while undergoing treatment for pancreatic cancer.

Rigathi Gachagua began his education in 1971 at Kabiruini Primary School before joining Kianyaga High School for his secondary school studies.

After getting his O levels certificate in 1981, he proceeded to the University of Nairobi (UoN) from 1985 to 1988 to pursue a bachelor of arts degree in political science and literature.

Rigathi Gachagua was during the regime of the late Daniel Arap Moi appointed the assistant secretary in the Ministry of Home Affairs and National Heritage.

In 1990, he rose through the ranks and was named personal assistant in the Head of Civil Service office.

Five years later, he was appointed Kakamega district officer (DO) before being shifted to Ngarua in Laikipia county in 1997.

A decade after joining public service, Rigathi Gachagua resigned from office and ventured into business in 2000, establishing the Ridor Group of Companies with interests in real estate, furniture, and general merchandise.

In 2001 during the last years of the KANU administration, he was handpicked by Uhuru Kenyatta, the then Minister for Local Government, to work as his personal assistant.

He fell out with Uhuru in 2006 and moved to work with his brother Nderitu Gachagua who was Mathira MP then.

Rigathi Gachagua rose to prominence in 2017 after his Nderitu Gachagua’s demise.

He took over the political leadership of the family and sought to replace him as Nyeri governor. He later changed his mind and opted to vie for the Mathira MP seat on a Jubilee Party ticket winning 49,628 votes.

Since being elected, he has been a close ally of Deputy President William Ruto, who has set his eyes on the 2022 presidency.

Rigathi Gachagua has been popularizing the so-called hustler nation, insisting it would empower ordinary Kenyans across the country.

Rigathi Gachagua is married to Dorcas Rigathi. The lovers tied the knot in 1986.

They reside in a lavish multi-million home in Sagana.

In July 2021, Rigathi Gachagua dismissed claims he acquired his wealth through dubious means after he was charged with KSh 7 billion money laundering charges.

He was accused of securing multi-billion tenders from the Nyeri county government between 2013 and 2017 using proxies.

The outspoken lawmaker dismissed the allegations and claimed he was a shrewd businessman who made his fortunes from several businesses, one of which was organising discos.

“I’m a prudent businessman, I started doing business 40 years ago. At the university we used to get KSh 2600 as boom, I would organize discos and pick half of the money from these guys; I had a car, I had a factory for sweets,” he told a local TV station.