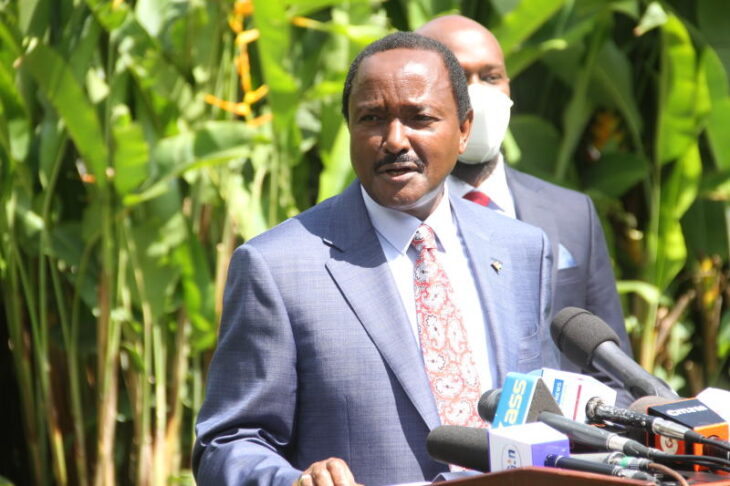 Kalonzo Musyoka is a long-time Kenyan politician who served as the tenth vice president of the Republic of Kenya and the Wiper party leader.

Besides serving in various Cabinet ministries and other high-ranking government positions since his entry to politics, Kalonzo also unsuccessfully tried his stab at the presidency in 2007, and in subsequent electioneering periods, the politician got into alliances with presidential hopefuls as a running mate.

Stephen Kalonzo Musyoka was born on December 24, 1953, to his parents the late Mzee Peter Musyoka Mailu and Sarah Musyoka.

He was born in Tseikuru, in Mwingi which is in the Eastern part of Kenya. He is 67 years old.

In 1960, Kalonzo Musyoka began his primary school education at the Tseikuru Primary School and completed in 1967.

In 1977, the politician graduated from the University of Nairobi with a law degree after which he joined the Kenya School of law for his post-graduate diploma in law.

He would later fly to Cyprus, in the Middle East, in 1979 for his post-graduate Diploma in Business.

Kalonzo Musyoka’s political career could be traced to the early 1980s when Kenya was still a one-party state. In 1983, he unsuccessfully vied for the Kitui North parliamentary seat.

Two years down the line, he would clinch the position after contesting in a by-election.

Shortly after emerging as the new Kitui North constituency MP, the politician was appointed as the assistant minister in the works housing and physical planning docket.

In 1988, he was re-elected to as Kitui North constituency MP and he also served as the deputy speaker in the National Assembly between 1988-1992.

Musyoka would successfully defend his parliamentary seat in the 1992 polls and he also received an appointment as Minister for Foreign Affairs.

In the 1997 polls, Kalonzo vied for the Mwingi North Constituency position and won. He held various ministerial positions during the late Daniel Arap Moi’s era.

In the lead-up to the 2002 polls, Kalonzo Musyoka dumped Moi’s Kenya National African Union (KANU) and was one of the founding members of the Liberal Democratic Party.

His new party supported National Rainbow Coalition (NARC) during the polls and whose presidential candidate Mwai Kibaki won the presidency.

He got an appointment as the minister in the foreign affairs docket in Kibaki’s government.

He would later be transferred to the Ministry of Environment and Natural Resources in 2004 and after the 2005 referendum, he was fired as he was one of the opposers of the proposed draft.

He was still, however, the Mwingi North MP.

In the run-up to the 2007 polls that left the country deeply polarised, Kalonzo announced his presidential bid.

After failing to get the ODM-Kenya presidential ticket, he fell out with its party leader Raila Odinga.

His fall-out led to the splitting of the party into two, with one group supporting Raila for the presidency while the other threw its weight behind Kalonzo’s presidential bid.

The election results showed he garnered 9% of the total votes cast in the presidential election.

After Kibaki was sworn in for a second term in 2007, he appointed Kalonzo as his vice-president and Home Affairs minister in 2008.

It is during the 2010 Kenyan plebiscite that Kalonzo was christened ‘watermelon’. This was after he was accused of publicly proclaiming his support for the new constitution while privately opposing it. The moniker has stuck with him till date.

In a previous interview, he hilariously said Raila Odinga gave him the nickname.

Just before the 2013 elections, Kalonzo joined hands with his long-time political rival Raila Odinga and together they formed the Coalition for Reforms and Democracy (CORD) with Raila as the presidential candidate and Kalonzo his running mate.

Uhuru Kenyatta and William Ruto defeated the duo and though they challenged Uhuruto’s win in the Supreme Court of Kenya, their petition was later thrown out.

In the 2017 elections, Kalonzo shelved his presidential ambitions again and got into a coalition with Raila Odinga, Moses Wetang’ula and Musalia Mudavadi to form the now-moribund National Super Alliance (NASA) which fronted the ODM leader as the presidential candidate.

They, however, lost the elections to President Uhuru and Deputy President William Ruto .

They challenged Uhuruto’s win in court citing rigging and the Supreme Court annulled the presidential results.

So far, Kalonzo Musyoka has already announced his 2022 presidential elections. Kalonzo also said he would no longer support Raila adding it would be foolish of him to support Raila again without any measure of reciprocity.

KalonzoMusyoka tied the knot with the love of his life Pauline in 1985.

In a previous interview, Kalonzo narrated he met Pauline while she was in Form Two in 1972. He was in Meru school while she was studying at Mlango Girls.

He said he was immediately smitten by her long hair and beauty.

They would keep in touch until 1985 when they were wedded. Their children are Kennedy Musyoka, Damaris Musenya and Klein Kalonzo.