After criticising William Ruto, politicians turn to the church for campaigns 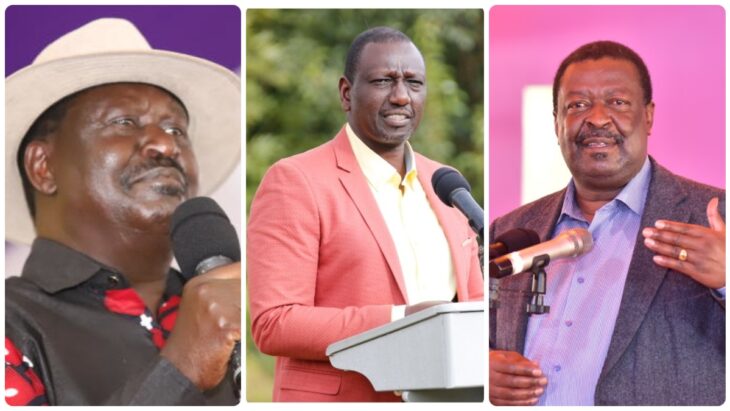 For the last four years, Deputy President William Ruto has been under sharp criticism over his unending church visits, and harambees conducted almost every Sunday.

For the last four years, Deputy President William Ruto has been under sharp criticism over his unending church visits, and harambees conducted almost every Sunday.

However, as the 2022 General Election nears, critics of the pulpit politics are falling into the same trap and normalising what they earlier termed “evil.”

For the last two months, Opposition leader Raila Odinga, a fierce critic of Ruto, has been consistently attending church services and using the podium to advance his political ambitions.

The same script has been adopted by ANC leader Musalia Mudavadi and his Wiper counterpart Kalonzo Musyoka, also strong critics of Ruto’s politics.

They have all gone slow on castigating the DP on church matters and are instead singing and dancing to the tune of pulpit politics.

On Sunday, September 5, Raila attended a church service at PAG Langata and used the opportunity to rally congregants behind his Azio La Umoja (quest for unity) clarion call.

He hailed the preacher for the powerful sermon and the uplifting message he delivered.

“Going to Church has always been a very reflective time for me and today Rev. Mudave of PAG Church, Langata gave a powerful sermon on the place of faith in our lives. I thank the charismatic and joyful congregation for the uplifting message. Baraka Tele! Blessings in abundance),” he twitted.

A week before, Raila had attended another church service `Bible Fellowship, in Kigumo, Murang’a county, where the clergy conducted special prayers for him.

“We joined the congregation at Bible Fellowship Church in Kigumo Constituency, Murang’a County for Sunday service. The presiding Bishop Peter Kamau gave an enlightening sermon on rising above excuses and committing fully to our causes,” Raila tweeted after the service.

On August 8, the former premier attended a service at A.C.K Mombasa Memorial Cathedral in Mvita, Mombasa county, where he too used to the pulpit to sell his political agenda.

For Mudavadi, the schedule has been the same. On September 4, he attended presided over a fundraiser at St. Cecilia Catholic Church, Mirangine in Nyandarua county.

I concluded a busy day today after traversing the Counties of Vihiga, Bungoma, and Trans Nzoia ending with a Fundraiser in Nyandarua.

I led the fundraiser at St. Cecilia Catholic Church, Mirangine where we raised Ksh.24 Million in aid of the Construction of the Church’s projects,” Mudavadi said via his Twitter handle.

A week earlier, the ANC leader had attended a service at AIPCK Church, Githunguri in Kiambu County.

“I was joined by Kiambu Governor H.E James Nyoro, Hon Moses Kuria, and other leaders. Peace will remain our guiding principle as we head to the 2022 General Elections,” Twitted the ANC boss after the function.

On August 22, Mudavadi was at Friends International Center Church, Nairobi, where he worshipped and later used the podium to market his 2022 presidential bid.

Kalonzo, who has made it clear his number one agenda is to stop Ruto from ascending to power, has also become a frequent church visitor.

On August 29, the former vice president worshipped at Redeemed Gospel Church, Pipeline in Embakasi. Like other presidential aspirants, he used the platform to advance his 2022 political ambitions.

He has been to many other churches across the country worshipping and politicking, just like the deputy president does.

Today’s sermon by Bishop Jonah Obonyo of the Cathedral of Praise – Imara Daima delved on fear.

Fear of the past, the present and the future. We are encouraged to know that fear is the absence of Faith and Hope,’ Kalonoz tweeted on July 11.

This new trend by Opposition leaders recently attracted the attention of Ruto, who satirically ushered them into church politics.

In a humour loaded public tirade, the DP chided his critics for ” finding salvation at last after a decade of condemning and demonising worshippers.”

He added: You know politics is sometimes helpful, some of these people would have never gone to church, politics have forced them to worship, and I pray that God saves them so we can do away with ‘uganga’ and all these things”.

Raila has been castigating Ruto for dishing out millions of shillings in church donations and fundraisers. According to the ODM leader, the second in command has been giving out monies received from proceeds of corruption.

He has severally warned the church against allowing such leaders to blackmail them with money in order to use the pulpit to advance their political agenda.

“People who are moving around with money in sacks are always approaching innocent churches to be invited for a fundraiser and come to boast in public that they are investing in heaven. Which heaven? That is looted public money and the church must reject it” Raila said in one of his public addresses.

Similar sentiments were shared by Kalonzo and Mudavadi, who wanted churches to stop inviting leaders who donate stolen funds.

“God is not destitute. God cannot be bribed. This is not showmanship, stolen money is just stolen money and can’t be sanitised by the church,” said Kalonzo during an interview with a local TV station.