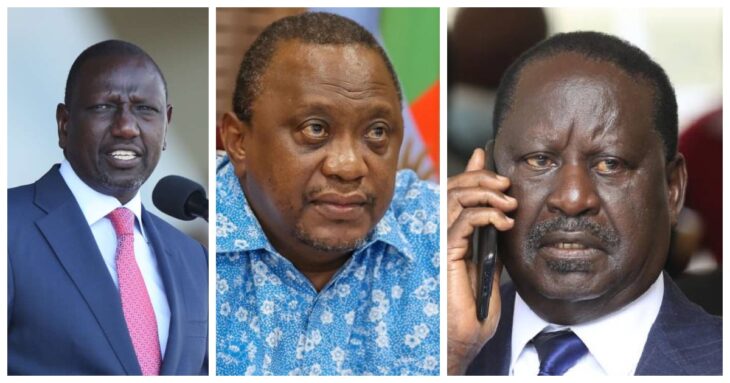 With the number of registered voters estimated to hit 7 million after the final lap of mass registration in December 2021, Mt Kenya has become a battleground for the presidential race

With the number of registered voters estimated to hit 7 million after the final lap of mass registration in December 2021, Mt Kenya has become a battleground for the 2022 presidential election contestants.

Political leaders from the region, who appear more confused and rudderless than ever before, have been on an overdrive bid to consolidate the region’s voting bloc for better stakes in the next government.

In so doing, they have coined misleading and divisive political sloganeering to create a perception that Mt Kenya is the Alpha and Omega of Kenyan politics.

They claim their community has over 10 million votes and should be sweet-talked by any of the 2022 presidential election contenstants who wants their support.

Gatundu South MP Moses Kuria recently spit in the face of Kenyans when he told other communities hoping to produce a deputy president in 2022 to forget it, claiming the position belongs to the Kikuyu nation and it’s not negotiable.

He added the community deserves to take 40% of the next government.

“We have agreed on the position of the deputy president is not negotiable. Commensurate with our votes, 40 percent of the votes in this country are from the Mt Kenya region,” said Kuria.

Under the umbrella of Mt Kenya Unity Forum, whose chair and spokesperson is Karua, the leaders have vowed to lock out anyone who does not conform to their irreducible minimums.

“It will be foolish for the Kikuyu nation to blindly support candidates without knowing what is in store for them…as a community cannot afford to take a back seat and pretend that we do not care who takes over, we have to be concerned, therefore, we must know what is our stake before electing someone,” said Kiunjuri.

To make fun of the country’s evolving democracy, some political novices with no compass direction have jumped into the ring and want to challenge serious contenders simply because they believe their backyard has more than enough votes to propel them to power without the support of other communities.

Kabogo, Kiunjuri, Murang’a Governor Mwangi Wa Iria, businessman Jimi Wanjigi and National Assembly Speaker Justin Muturi are some of the leaders from Mt Kenya who have declared interest in the presidential seat.

They seem to believe they can rule Kenya without necessarily working with the other 42 tribes that exist within our borders.

They pushed for a change of the constitution to bar Moi from automatically taking over from Kenyatta after the president’s death.

It took the wisdom of then-Attorney General Charles Njonjo to stop them, by warning that it was treasonous for one to think about a sitting president’s death before it happens.

During Kibaki’s reelection in 2007, a group of rapacious political operatives tinkered with the electoral process and ensured the former president retained his seat at all cost.

Some of those adversely mentioned in the grand scheme include Karua and former head of civil service Francis Muthaura.

The aftermath of the bungled elections saw hundreds of lives lost and thousands of families displaced.

With President Uhuru’s final term coming to an end in the next 11 months, and with no clear succession plan in place, the community feels threatened that the long-standing lineage of leadership will die and rest in peace, never to be resuscitated again.

It’s out of this frustration that the most vocal leaders are now trapped in the oblivion guesswork meetings, desperately pressing wrong buttons in a bid to save the boat from sinking.

The entitlement, coupled with desperation, has seen the vote-rich region split right in the middle between the East and the West, for the first time in history.

Despite producing three presidents out of four, and being in power for a cumulative period of 33 years, Mt Kenya leaders are still decrying under-representation and a myriad of other issues.

They still want to cling to power with a sense of entitlement so overbearing and demeaning of other communities that they should be left to continue basking in the glory of power as others share a shell of the government for the rest of their existence.

“You can only rent a Kikuyu but you can’t buy one,” Kirinyaga Governor Anne Waiguru once remarked.

“Politicians cannot meet in hotels like they have been meeting in Maasai Mara and elsewhere then claim to make political decisions for 10 million Kenyans from Mount Kenya. The region cannot be like a goat or chicken that someone can just take to the market for sale,” he asserted.

The visibly infuriated governor added: “There are people saying that we (Kikuyus) should not be on the ballot and I disagree with that. I will be on the ballot; Kenyans will vote and when the votes are counted the winner will be the next president of Kenya”.

The threats, regrouping, and manipulation of figures have compelled politicians seeking the presidential seats to pitch camp in the region hoping to heave a share of the votes to bolster their bids. The fight has been taken to the mountain and the end game will be the Kikuyunisation of Kenyan politics.