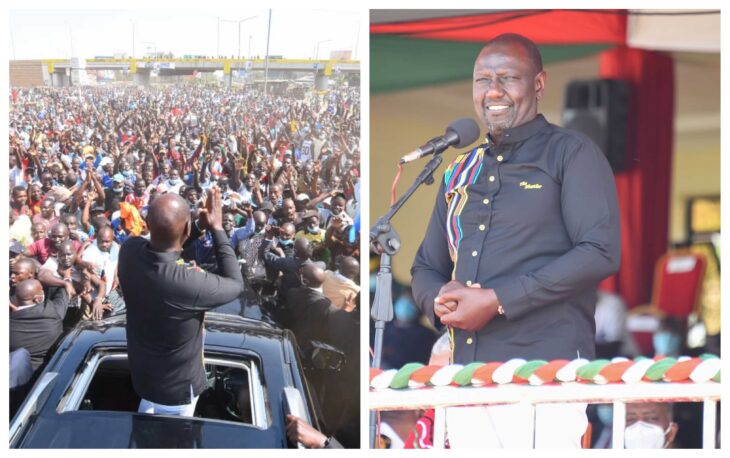 Kenya’s deputy president William Ruto has said his government shall set aside KSh 34.8 billion annually for hustlers (small businesses) if elected the fifth president of Kenya.

Speaking in Awendo town on Saturday, September 25, the deputy president said his government shall be setting aside KSh 120 million for each of the 290 constituencies to help small business improve their fortunes.

“I have been told off for helping hustlers in my campaigns, but as an economic agenda, I will set aside KSh120 million annually in each constituency in the country when elected just to help boost businesses of hustlers,” Ruto said.

The former Agriculture Minister who presided over a fundraiser at Awendo Central SDA church donated KSh 1.4million for 48 Boda Boda groups and KSh500,000 for women traders in Awendo town in a move he said will help build hustlers.

“The money I have given you is little. Next year (if I am elected President), we will not give you money in cash,” he added.

The deputy president further took a dig at political leaders who have been on record criticising his church donations saying he was happy they have also started going to church.

“All leaders have shifted to church and that is the best matter because I have preached to them and they have seen the light, we must first seek God, and others desires will be added and be blessed as a country,” Ruto said.

Addressing the roadside crowd from the top of his top-of-the-range vehicle, the deputy president further challenged Uhuru Kenyatta and Raila Odinga to support his presidential bid in the forthcoming 2022 General Election.

“In 2007, while I was the Deputy Party Leader of ODM, I helped Raila Odinga to become the Prime Minister of Kenya. In 2013 and 2017, I helped Uhuru Kenyatta to become the President. This time around, I am asking them to allow me (by supporting me) to elevate you, the small-scale traders, to higher economic positions,” he said.