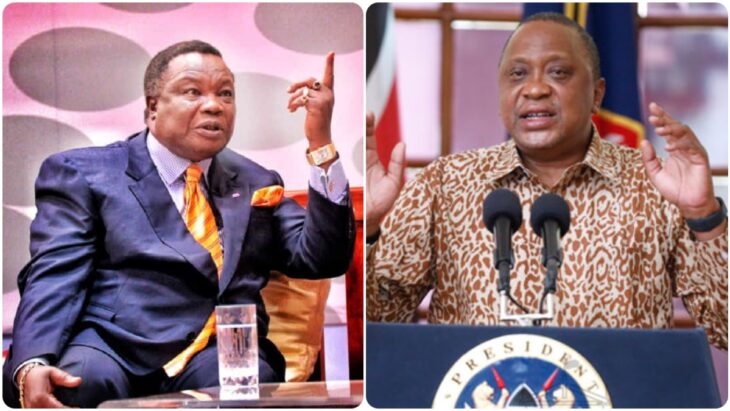 From around 2019, President Uhuru Kenyatta has often been captured wearing African print shirts. His love for these particular types of shirts became conspicuous in 2020 as he would show up for coronavirus state addresses, donning them, and further exciting Kenyans online.

Kenyans being Kenyans would soon even nickname the president ‘Uhuru wa Mashati’ as his love for African print shirts remained consistent.

We look at 12 times the head of state looked dapper in his signature Kitenge shirts.

Just recently, President Uhuru Kenyatta stepped out in a classy, checked African print shirt which lit up his entire look.

The president proved he is proud of African printed shirts during a high-profile event. This is because he gave his speech virtually at the United Nations Global Compact’s Private Sector Forum which was held on Monday, September 20.

On Saturday, September 18, President Uhuru Kenyatta did not disappoint after showing up at the Kip Keino Classic with a beautiful patterned red African shirt.

The head of state attended the event at the Moi International Sports Centre, Kasarani and he complimented his shirt with black trousers and a pair of sneakers.

He was also captured cheering on and congratulating sprinter Ferdinand Omanyala.

While meeting with Citigroup Chief Executive Officer Jane Fraser who paid him a courtesy call at the State House, President Uhuru Kenyatta also went for a more casual look.

Uhuru went for a nice bright-coloured African shirt that had lovely prints. He paired this with black trousers and an expensive wristwatch that completed the entire look.

President Uhuru Kenyatta also went for a bold blue African-print shirt during an event at statehouse.

The stylish shirt had beautiful patterns that made it eye-catching.

He wore this look in July 2021, while hosting officials of World Leaders of Today (WLT), at State House Nairobi and it was just perfect.

On the day that he received Kenyan athletes who were about to head to Tokyo for the Olympics game, President Uhuru Kenyatta also show-cased his love for classy African-print shirts after wearing an Ankara shirt.

His lovely shirt had conspicuous patterns that made it more stylish.

Speaking of bold Ankara colours, President Uhuru Kenyatta also gave the 16th presidential state address on the coronavirus pandemic in a classic kitenge shirt. Well, it can never be a coronavirus update without his African shirt.

Similarly, while presenting brand new rally cars to young Kenyan drivers, Uhuru had on a lovely and bright red-African print shirt that made him look more lively.

He also had on a red cap that complemented his already classy look.

During his Kisumu tour in late May 2021, President Uhuru Kenyatta was captured donning a number of fashionable African print shirts.

One of them was this stylish shirt that he wore during the launch of the Bondo Water Supply Project in Siaya County.

When Tanzania President Samia Suluhu visited the country in early May, President Uhuru also showcased his love for his African print shirt.

He paired his blue and black shirt with black trousers and it was the perfect look for the event.

Uhuru is on record encouraging Kenyans to buy and wear locally-made shirts with his love for the attires showing they can also be chic.

Uhuru, had, in 2020, asked government officials to don such shirts every Friday in support of Kenyan textile industries.