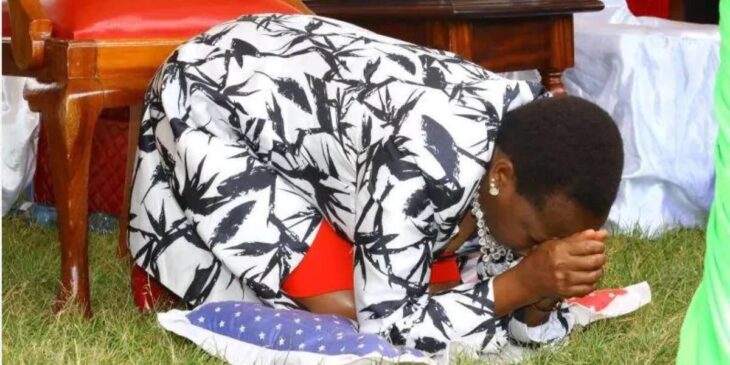 Deputy President William Ruto’s wife Rachel Ruto is no doubt a humble and modest woman who has not let the trappings of power interfere with her humane side.

Despite being married to the second most powerful man in the nation, Rachel Ruto has always shown respect and humility to everyone she meets, and most importantly, to even her husband.

We look at 10 times that Rachel proved she is a humble and respectful woman.

This particular photo got many Kenyans talking in 2019. The second lady was pictured in a rather respectful handshake to her husband, the deputy president and many Kenyans appeared to suggest that the handshake was ‘too respectful’.

In her signature handshake, Rachel had bent slightly forward while her left arm was on top of her right hand as she shook hands with the DP.

Many were particularly concerned that Ruto appeared not to give her attention as he barely made eye contact with her. Nonetheless, many hailed Rachel Ruto as a very respectful woman.

Standing next to her husband and before a crowd of government officials, Rachel Ruto did not shy off from humbly shaking hands with Kibaki by having her left hand on top of her right which is deemed as a sign of respect and humility.

In a past public ceremony, Rachel also moved Kenyans by the way she exchanged pleasantries with President Uhuru Kenyatta.

She slightly leaned forward, put her left hand on top of her right, and shook hands with the president, who was seemingly awed by her show of respect and humility.

You may be tempted to think that Rachel only greets powerful men in such a manner but she has often been captured shaking hands with women and showing the same amount of respect and humility.

For instance, she once also humbly shook hands with First Lady Margaret Kenyatta during an event and this warmed the hearts of netizens.

Besides doing the noble act, she did not hesitate to praise and show respect to the former headteacher whom she credited with her success.

Rachel has always shown her humility and kindness to ordinary Kenyans and is often ready to help when they are in need.

This is going by some of the snaps in which she has been captured helping the needy and the poor and also empowering women through her Joywo organization.

One of the many attributes of the second lady is that she is a prayerful woman and perhaps, this is where her humility stems from.

From organising weekly prayers to opening a National Altar at William Ruto’s official residence, Rachel spends a lot of time in prayer.

In his speech after being elected into office in 2013, the deputy president hailed his wife for sneaking from their bed at night to go pray for him in the months leading to the elections.

This photo of Rachel lovingly interacting with a child who was seemingly from a humble background stole the show during a past event.

She listened to the boy who came to him and did not seem bothered by him.

On many occasions, Deputy President William Ruto has often praised his wife for being a supportive partner and in some instances, she credits him with his success. Rachel is often captured showing love and support to her husband while also maintaining her humility.

She once advised wives to be careful not to speak after their husbands and to always show respect in their homes.

“Rachael Ruto’s humility and simplicity, whether born out of the Kalenjin culture or her Christian values are simply amazing,” he said on his social media platforms.