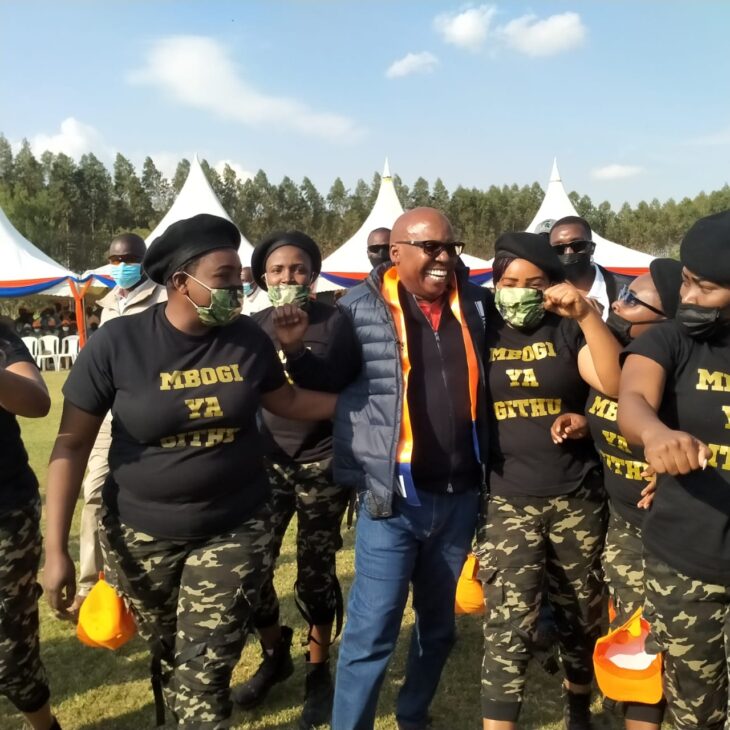 Jimmy Richard Wanjigi is a powerful Kenyan businessman turned politician who declared he will run for the presidency in 2022.

Wanjigi only came to the limelight a few years ago, majorly during the 2017 elections when police officers staged a three-day raid at his palatial Muthaiga home.

Jimmy Wanjigi was born on November 17, 1962, in Nyeri county. He was born to Maina Wanjigi and Mary Wanjigi. Maina was a powerful cabinet minister during the late president Daniel Moi’s era.

Maina Wanjigi served as a minister of cooperative development and he is associated with the success of Saccos in the country. He was also a Tourism Minister.

Being the son of a powerful minister, Wanjigi had the unique opportunity to get a good education. He attended St. Mary’s School in Nairobi, which is the same school that President Uhuru Kenyatta and Baringo Senator Gideon Moi attended.

The businessman would then fly to the University of New York where he did his degree in Business between 1982 and 1986 after which he came back to Kenya to pursue a career in business.

Jimmy Wanjigi is a well-known businessman in Kenya. In a TV interview, he revealed he got a foothold in the business world after starting a garbage-collection company in Nairobi after returning from abroad.

Wanjigi said through his company, BINS Limited, he got the city council to allow him to collect garbage around the city and dump it in Dandora. He, later, sold the firm.

Being from a well-connect family which shared close ties with high-ranking senior government officials, Wanjigi, has been working closely with the government with his companies getting government tenders.

He, once, also said he makes money by working as an agent of various companies that work with the government. He is linked to among others, companies such as TYL, which deals with transactions and cash transfers of millions of dollars.

Wanjigi is the chief executive office of Kwacha Group of Companies, a family-owned company that has interests in different sectors such as agri-business, real estate, and the financial sector.

Jimmy Wanjigi grew around politics being that his father, Maina Wanjigi served in late Daniel Moi’s government. In 1992, Jimmy Wanjigi was involved in Kenneth Matiba’s campaigns.

He would go on to play key active roles in Kenyan politics albeit behind the scenes while also maintaining very close ties with senior government officials such as late minister George Saitoti who died in an aeroplane crash in 2012.

In 2013, Wanjigi was a major financier of the Jubilee Party alliance that brought together President Uhuru Kenyatta and William Ruto who won that year’s General Elections.

However, shortly after their ascendance to power, the businessman fell out with the Uhuruto government over what he recently revealed was due to a difference in policy.

In the 2017 polls, Wanjigi defected from the Jubilee Party and moved to support the National Super Alliance which had fronted Raila Odinga as its presidential candidate.

His involvement with NASA landed him in trouble with the Jubilee government and his Muthaiga home would be raided for police officers for three days.

After years of being a financier and being behind the scenes in Kenya’s political landscape, the tycoon announced his 2022 presidential bid in June 2021. Wanjigi is seeking to throw his hat in the ring under an Orange Democratic Movement (ODM) ticket.

However, his presidential ambitions have put him at crossroads with senior officials in the opposition party who are rooting for a Raila candidacy.

Jimmy Wanjigi is married to his wife Irene Nsiza with whom he has two children. Nsiza keeps a low profile but in 2017, she warmed hearts after pictures of her showing support to her then-distressed husband circulated on social media.

During a press conference in 2017 after the three-day raid at their home, she was captured holding on to her husband during the maiden appearance.

She operates an art Gallery at Kwacha house, also owned by her husband’s family. The couple’s two children study at the most expensive private schools in the world