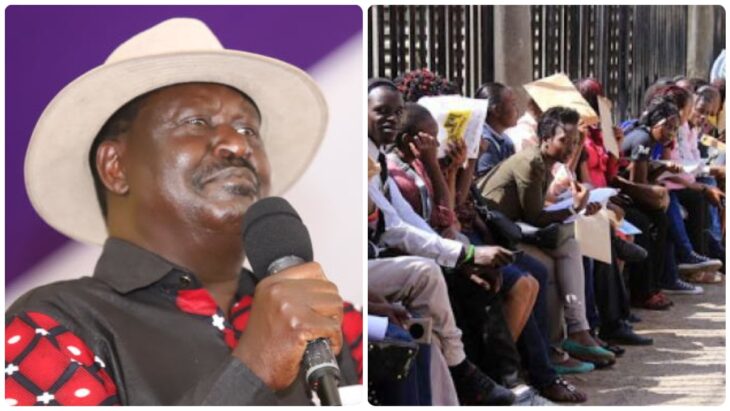 ODM leader Raila Odinga has assured KSh 6,000 monthly stipends to all hustlers should he become the president in the 2022 General Election.

ODM leader Raila Odinga has assured KSh 6000 monthly stipends to all hustlers should he become the president in the 2022 General Election.

Speaking on Sunday, October 10, after attending a church service at the African Inland Church in Naivasha, the former Prime Minister said fighting unemployment will be a top priority should he succeed retiring President Uhuru Kenyatta.

He noted he has a plan to ensure the unemployed are catered for and provided with KSh 6,000 monthly stipends to cushion the vulnerable families and give them a financial lifeline.

According to Raila, his administration will establish the Social Welfare States that will be mandated to distribute KSh 6000 every month to all unemployed Kenyans.

“I want to see if every Kenyan gets a job, those who do not get jobs means there will be social welfare states, they will get every month from the government six thousand shillings,” he said.

He took a swipe at Deputy President, William Ruto, questioning his source of wealth that he was dishing out handouts to the youths and churches.

“Kenyans don’t need handouts for sustenance, what they need is the enabling environment that will make them thrive economically,” he added.

In renewed efforts to end unemployment, the former Lang’ata Member of Parliament said he will push for the youths to be provided with capital to start businesses immediately they step out of schools.

“Then we want to see our young people who have graduated are given money to start their own businesses,” he said.

Odinga said it is possible to ensure all these promises are fulfilled only if corruption is tamed in all sectors of our economy.

“My economic team has guaranteed me that it is possible and that is where ODM wants to take the country,” he said.