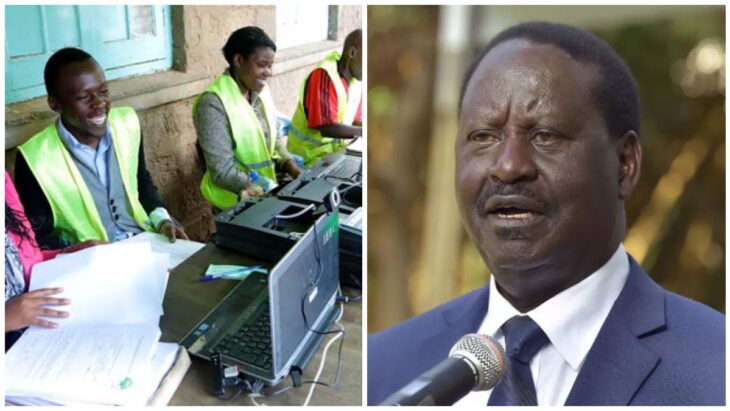 The latest data from the Independent Electoral and Boundaries Commission (IEBC) revealed that Odinga’s traditional strongholds in Coast and Nyanza regions had performed poorly in new voter registration.

Furthermore, seven out of ten counties from President Uhuru Kenyatta’s vote-rich Mt Kenya region which has thrown weight behind the former Prime Minister Raila Odinga have registered the least number of votes with just 1 percent point.

A status update on the continuous voter registration exercise on Monday, October 11, showed that IEBC had only registered 202, 510 new voters in the last seven days out of the weekly target of 1.5 million voters.

“For the last seven days, the commission has registered 202,518 new voters out of the weekly target of 1,500,000,” IEBC chairperson Wafula Chebukati said in a statement.

Chebukati attributed the low voter turnout to lack of ID cards, a crucial document for registration of new voters, voter apathy as well as Kenya’s culture of last-minute registration.

IEBC launched the enhanced voter registration exercise on Monday last week where it announced that it expects to register at least six million new voters in the drive conducted at the Ward level.

Last month, President Uhuru Kenyatta’s handshake partner Raila Odinga said he may not give the fifth stab at the presidency come 2022 if his supporters fail to register as voters.

He said he will first gauge the number of people who will have registered as voters from his strongholds before he makes an announcement regarding his presidential ambitions.

“I cannot vie if my people will have not registered for IDs and voters’ cards. “I will first gauge the number of people who are registered before I make my announcement on the presidential race… I have mastered all the ways to maneuver through this journey,” he said.