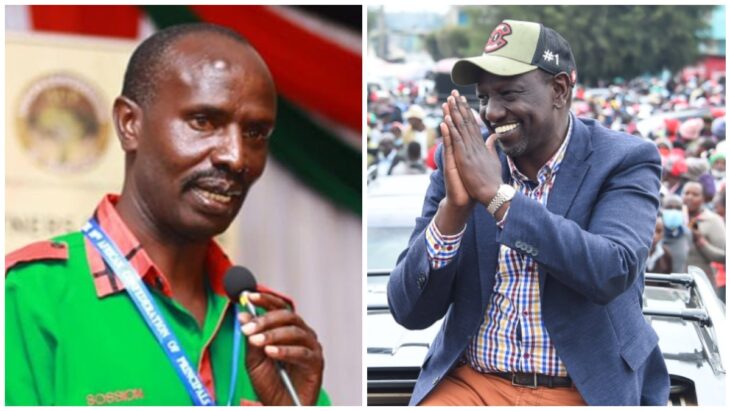 The nominated MP on Monday, October 11, revealed that the decision to shift allegiance to William Ruto’s political camp was reached after a meeting with elders from his rural home, who advised him to ditch ODM and popularize Ruto’s UDA party.

“They say charity begins at home, the elders of Motigo Sub location in Bomet Central have decided to endorse my senate aspirations in 2022,

“The elders have advised me to stick on the prize and avoid backing any politician but to support the Deputy President William Ruto in his 2022 presidential bid as well as popularizing the newly formed party UDA,” Sossion said.

Sosion who was nominated on ODM ticket in 2017 further said he ditched Raila Odinga’s party after sensing that it would be so hard for the former Prime Minister to succeed retiring president Uhuru Kenyatta in the 2022 presidential elections.

“Your excellency we want to believe that you will be a record-breaker as the 5th President of Kenya,” Sosion said.

The former Secretary-General of the Kenya National Union of Teachers (KNUT) said Ruto’s model will be a game-changer to the welfare of workers in the country.

“In the world, the bottom-up economic agenda is pro-common man, an agenda of equality and prosperity for the common Mwananchi. DP Ruto I can tell you with the choice of this economic model, I count you as one of the brave leaders in Africa,” Sossion said.