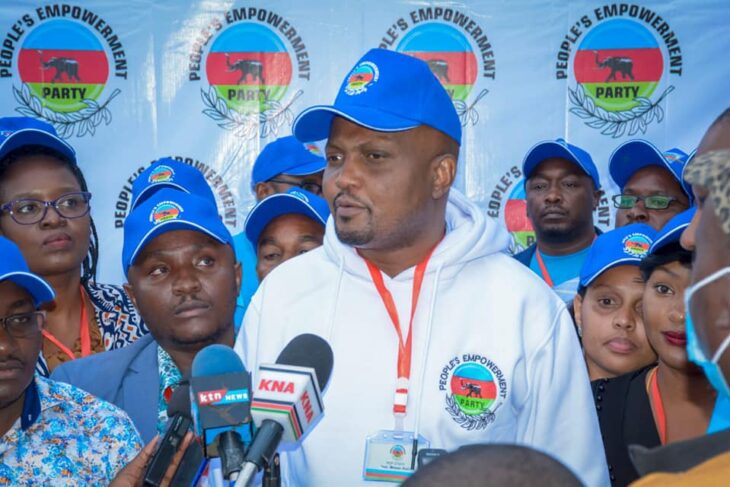 State House director Dr. Michael Waikenda has been appointed by Moses Kuria’s party as the chair of the party’s National Election Board. Photo: Moses Kuria/Facebook.

Through his social media page on Wednesday, October 13, Kuria made it clear that the move by the Chama Cha Kazi (CCM) party to restricts MCA nomination is set to pave way for the youths to scale up the leadership ladder in the party.

“Bad news if you are over 45 years and seeking to vie for MCA position. Chama Cha Kazi will not nominate anyone above 45 years to vie for the MCA position. Let’s walk the talk,” Kuria said through his Facebook page.

Kuria unveiled CCK Party in early August 2021, following wrangles within the People’s Empowerment Party (PEP), an outfit that clinched the Juja parliamentary by-election in May.

The outspoken legislator has been popularising the CCK whose tagline is “Kazi Pesa Umoja.”

The party was formed with the intention of pushing for the dignity of work, sanctity of enterprises, and unity in diversity.

Kuria who has declared that he will not be vying for any political seat in the 2022 General Election said he will focus on building and popularising his party.

“I have decided, I will not vie for any political seat in the 2022 General Election. “I am focussed on building Chama Cha Kazi for the interest of Mt Kenya,” he said on Tuesday, August 31.

The legislator has lately been vocal about the need to have a strong political party for the larger Mt Kenya region, which is the largest voting bloc in Kenya.

“I think it is unfair. It is the first time, in 30 years, we have agreed that we (Mt Kenya) are not going to have someone on top of the ticket from this region,

“Now we agree to that and you want to deny us the chance of having a party? It is unfair, unacceptable,” he said while dismissing calls to fold his party before joining United Democratic Alliance (UDA), a party associated with Deputy President William Ruto.