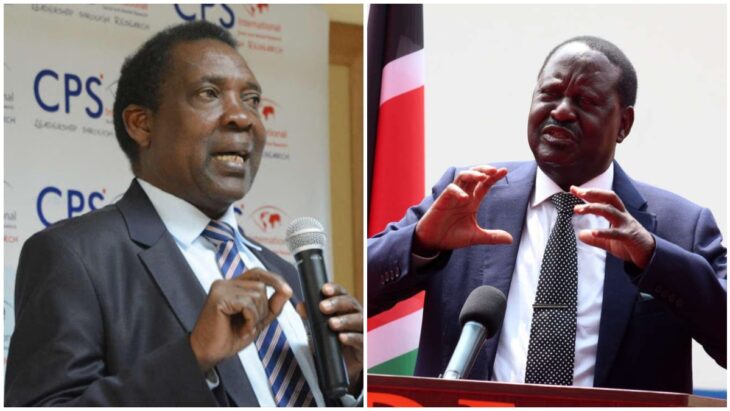 Political analyst Herman Manyora has warned about Raila’s Ksh 6,000 promise to the youths after he assumes office.

Political analyst Herman Manyora has said Raila Ksh 6,000 promise to struggling households will be hard to implement in as much as it is a great campaign tool.

In his analysis, Manyora warned that Raila Odinga’s plan to give unemployed Kenyans the monthly stipend might end up not benefiting the right people and might also promote laziness among Kenyans.

Manyora also said that the ODM leader is promoting socialism in a highly capitalistic nation that is Kenya by promising the social protection mechanism.

“That is a dangerous thing to say. Raila should put it in a manner that does not antagonize the rich people who support him and can interpret the promise as socialism,” he said.

Manyora said that Raila’s first challenge in disbursing the stipend shall be to identify the right people who deserve it.

” Because Kenyan’s are lazy in the way they think, the implementors shall just disburse the money to anyone. Someone shall be working at a quarry in Kenya, come receive the money and go back to his menial job,” he said.

The analyst said unless there is a mechanism to ensure the right recipient are picked, the stipend does not introduce laziness, it shall not achieve the intended purpose.

Manyora however dismissed reports that the country can not afford Raila’s Ksh 6000 fund to the poor in society.

He argued that the Kenyan economy can accommodate up to Ksh 30,000 stipend to the less fortunate in society.

“The other one (bottom-up approach) is hanging in the air, it doesn’t have legs to stand on. People close to Ruto have been unable to explain it because there is nothing to explain,” he said.

In his appeal to the youths, Raila Odinga said his government will give them Ksh 6,000 stipend per month.

Additionally, he promised to give them positions in his cabinet if elected president in 2022.

Raila said he has worked with the youth before, during his reign as Kenya’s Prime Minister in President Kibaki’s government.

Through ODM Secretary General Edwin Sifuna, a section of youths also asked Raila to lower the price of alcohol.

“Baba, young people have said because life is short they want to have a good time but the curfew has restricted them very much and they want it removed. They have also told me to ask you to lower the prices of alcohol,” he said.