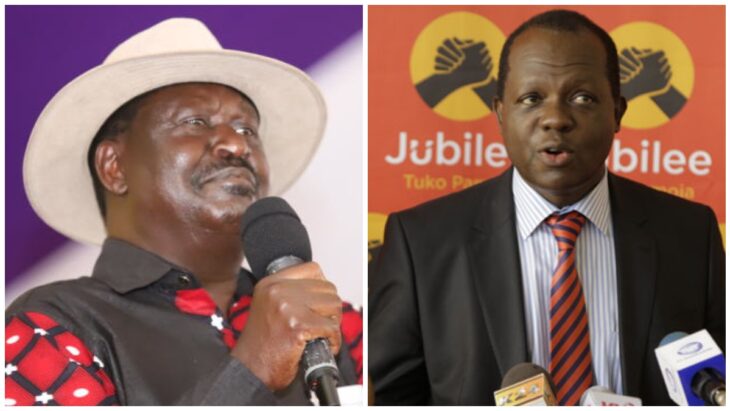 ODM leader Raila Odinga’s presidential bid has received a major boost after Jubilee leaders drawn from all the 12 sub-counties in Kiambu threw their weight behind former Premier ahead of the 2022 elections.

ODM leader Raila Odinga’s presidential bid has received a major boost after Jubilee leaders drawn from all the 12 sub-counties in Kiambu threw their weight behind former Premier ahead of the 2022 elections.

In a meeting convened in Limuru by Kiambu governor James Nyoro on Thursday, October 14, the Jubilee leaders committed to conducting door-to-door campaigns for Raila who they described as development-oriented.

Led by Kiambu Woman Rep aspirant Mary Kirika, the leaders castigated a section of Mt Kenya politicians who have been accused of disrespecting the party National Chairman, President Uhuru Kenyatta.

She said that the first in Command is and will remain the Mt Kenya regional kingpin even after retiring from politics next year.

Kirika said while the Head of State is yet to give the direction of his preferred successor, it is beyond doubt that opposition leader Raila Odinga is President Uhuru’s choice for the 2022 presidency.

“We shall follow the direction which President Uhuru (Kenyatta) will show us. Even though he has not said it openly, actions speak louder than words,” she said as reported by People Daily Newspaper.

The leaders spoke just a day after Kenya’s Deputy President William Ruto sensationally claimed that he owns the key to Mt Kenya votes.

The leader indirectly hit back at the deputy president for allegedly using proxies in search of a share of the vote-rich Mt Kenya region daring him to use the main door if he indeed has the key to the region.

“Let them come through the front door and not through the backdoor. Uhuru is the key to Mt. Kenya region,” she said in an apparent reference to William Ruto.

The Mt Kenya region has been considered to be a political battleground for all presidential aspirants due to the fact that the region will be heading into the 2022 General Election without a formidable presidential candidate.