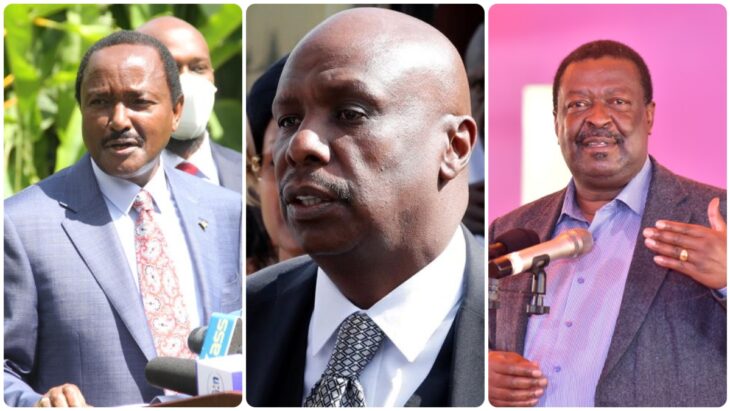 The One Kenya Alliance (OKA) principals have put off hopes of reuniting with Raila Odinga ahead of the 2022 General Election.

It has emerged the alliance which includes Musalia Mudavadi (ANC), Gideon Moi (Kanu), Kalonzo Musyoka (Wiper), Moses Wetang’ula (Ford Kenya) is on the verge of signing a coalition pact that would restrain them from working with any other presidential candidate.

Kimilili Member of Parliament Chris Wamalwa, a senior member of the OKA’s board, said that the technical committee has finalised the coalition’s instrument which seeks to bind the principals together.

“The principals had the opportunity to look into the agreement and they will soon sign it,” Wamalwa stated.

There have been suggestions that the OKA was considering reuniting with Raila Odinga to form a political team that would face Kenya’s Deputy President William Ruto in the 2022 General Election.

This comes just a day after the Wiper leader Kalonzo Musyoka insisted that he will not support Raila Odinga’s presidential bid for the third time.

Speaking during an interview on Emoo FM, Kalonzo urged Raila to retire from active politics, stating that he is the oldest among all other presidential candidates.

According to him, age will have caught up with the 76-year-old Raila Odinga, and it is only wise for him to follow President Uhuru Kenyatta who is expected to hang his boots in August 2022.

“My thinking is that President Uhuru should go home with Raila. If you look at the ages of all the others who want to contest for the presidency, Raila is way ahead of us,” Kalonzo said.

The former Vice president has on several occasions stated that it is time for the former Prime Minister to rally behind his quest, having supported his bid in the last two consecutive General Elections.