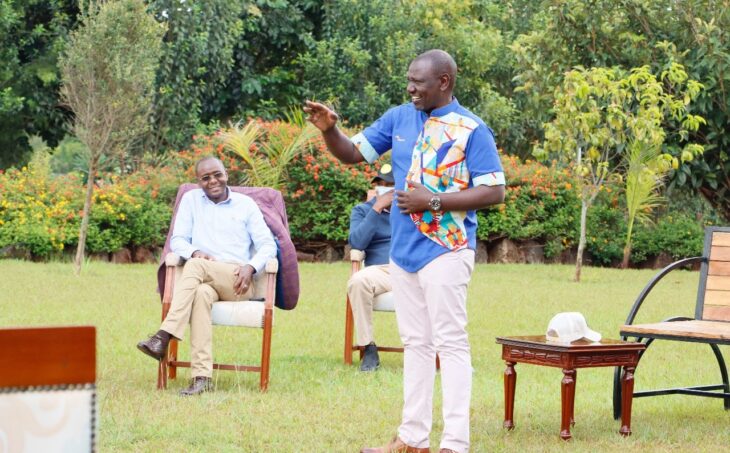 The palatial residence which he now christens the hustler’s mansion was renovated and commissioned by former president Mwai Kibaki in 2012 and is meant to be occupied by Kenya’s deputy presidents.

The mansion had gobbled up KSh 450 million by the time of its launching. Ruto has lived in the house for more than eight years since he ascended to the helms of power in 2013 when he became Kenya’s second in command.

In the recent past, however, the man from Sugoi has been coming under fire for using the property as his campaign headquarters.

His critics argue the DP has been using public resources to advance his political agenda as he prepares for the 2022 presidential contest.

The mansion has various luxurious amenities that make it conducive to holding large meetings. Here are some of the photos of the Karen residence

The multi-million house boasts of among other features, a massive swimming pool for Ruto and his family.

The property also has fascinating manicured gardens and the DP is often captured meeting politicians on the expensive gardens.

The beautiful mansion which sits on a 10-acre piece of land also has an office block where the DP and his staffers have their offices to get their work done.

Ruto is often captured holding meetings in this block with the various delegations who meet him at his Karen residence.

Besides the main house, the palatial residence also consists of staff quarters, a security house which is complete with a depot, and a separate house for all guests.

4. Photos of the interior reveal the main house’s breathtaking interior décor. It has one floor and several balconies. The property also has a media center, a gazebo that overlooks the swimming pool.

Additionally, William Ruto and his wife, Racheal Ruto also opened a prayer altar in the official residence. The couple, who are Christians, invited men of faith to the residence during the launch of the National Prayer Alter in 2019.

A sneak peek into the residence’s kitchen reveals its high-end cooking electronics used to make food for the second family. Other pictures of the interior also shows it is cream-colored.

President Uhuru Kenyatta and his handshake partner Raila Odinga are some of the politicians who have visited the residence in the past.

Currently, Ruto is using the residence to meet politicians, host United Democratic Alliance meetings and craft his 2022 presidential campaign strategy in this residence.