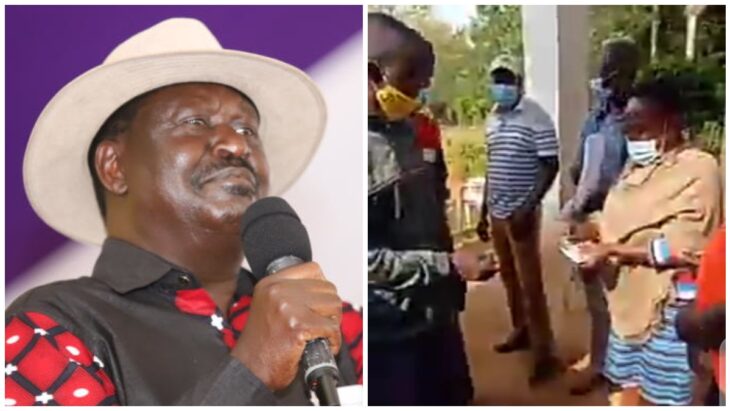 A number of youths were caught on camera receiving money to attend Raila Odinga’s rally in Nairobi on Wednesday, October 14.

A number of youths were caught on camera receiving money to allegedly attend Raila Odinga’s rally in Nairobi on Wednesday, October 14.

In the video shared on social media platforms, the youths are seen lining up receiving what appears like Ksh 1,000 note from a lady.

As the hundreds of youths that are believed to have been attending Raila Odinga’s rally received the money, a female politician is heard speaking in Dholuo.

“ODM is filthy rich…imagine KSh 1000 per person for attending yesterday’s rally,” he wrote.

Lately, the ODM leader has focused on winning the hearts of the youths, imploring them to vote for him in the 2022 General Election.

In a meeting with youths from the Mt Kenya region on Tuesday, Raila promised to give at least 4 cabinet positions to them once he assumes office.

“It is something I have tried before and will be part of my policy, on the issue of cabinet positions for the youth… I can say it will be more than four,” Odinga said.

“Baba, young people have said because life is short they want to have a good time but the curfew has restricted them very much and they want it removed. They have also told me to ask you to lower the prices of alcohol,” he said.

Other than the cabinet positions and reduction of alcohol prices, another negotiation that Raila has with youths is provision of a stipend.

“We want every Kenyan to get a job but for those who are unemployed, there will be a social welfare state through which they will get KSh 6,000 monthly stipend,” he said.