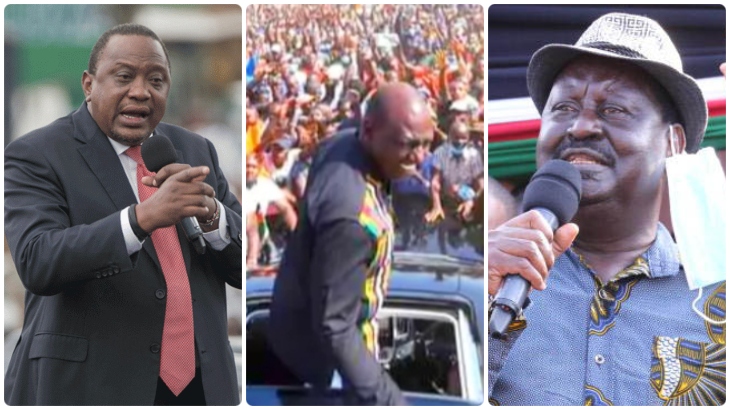 Speaking during an empowerment program for residents of Wundanyi, Mwatate, and Voi in Taita Taveta County on Thursday, October 14, the deputy president said when he supported ODM leader in 2007 and President Uhuru Kenyatta in 2013 and 2017, they considered him a good man.

He went ahead and said that the duo no longer sees him as a good person like before due to his charitable deeds to the less economically empowered members of the society.

“When I supported Raila to become Prime minister and later my friend Uhuru (Kenyatta) to become President, I was a good man. But now that I want to support hustlers, I have suddenly turned out to be a bad man,” William Ruto said.

Commenting on the ODM-Jubilee merger that seeks to nominate Raila Odinga to face off with him in the hotly anticipated 2022 presidential race, the deputy president urged Kenyans to stop ethnic-based groupings and embrace political parties with a national outlook.

Ruto,while drumming up support for his recently rebranded United Democratic Alliance (UDA) said it is the only party with a national outlook.

The Deputy President claimed it is only the United Democratic Alliance among the current crop of political parties that has a national outlook.

“Do not allow to be misled to support political parties with tribal groupings and which have no development agenda for the country,” Ruto said in an apparent reference to Raila Odinga and his former co-principals in NASA who moved on to form One Kenya Alliance.

It is understood that the deputy president whose relationship with his boss President Uhuru has deteriorated beyond irredeemable levels is not among the list of presidential favourites to succeed retiring president Uhuru Kenyatta in August 2022 General Election.

Although the Head of State has not publicly declared his support to former Prime Minister Raila Odinga, his allies especially those from his turf have made it clear that Raila is Uhuru’s preffered successor.