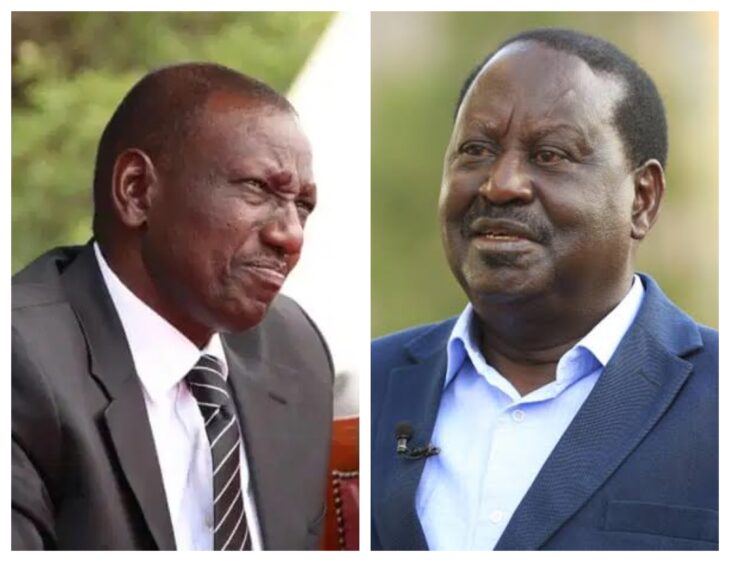 Deputy President William Ruto has been charming the youth with his hustler narrative and bottom-up economic model as the silver bullet to the myriad of challenges affecting them while criticising Raila Odinga for being obsessed with creating positions in government.
For the last three years, Ruto has been dominating the political scene with this populist narrative that opened a gap between him and competitors, almost making it difficult for them to catch up.
However, a few months after ODM leader Raila Odinga entered the political field to hunt for youths’ votes, Ruto’s narrative has started to shrink drastically.

The former Prime Minister’s promise to give every needy household KSh 6, 000 per month as part of his administration’s social welfare programme has badly punctuated the DP’s hustler narrative, which promises to help the economically marginalised groups to create wealth.

Nothing appeals to the Kenyan youth more than a promise to be given free money at the end of every month.

Majority of young people today live hand-to-mouth and have every reason to embrace an idea that would guarantee them food every day and sustain their livelihoods one month after the other.

Although experts have poked holes into the idea, the ODM leader appears to have gotten the right antidote to wade off Ruto’s political dominance and jeopardise his unrelenting quest to woo the youth to back his bid.

The former premier’s social welfare fund has widely been accepted across the country within a short period of time.

On Wednesday, October 13, Raila charmed a mammoth crowd in Kamkunji when he restated his commitment to cautioning the downtrodden with the KSh 6, 000 monthly stipends.

The gathering, mainly composed of the youth, applauded the idea while taming Ruto’s wheelbarrow politics (bottom-up).

“Hatutaki wheelbarrow, tunataka pesa (we don’t want wheelbarrow, we want money),” they kept chanting until the ODM boss calmed them down.

His messaging is resonating with the youth and swaying their initial political stand, which had seen them embrace the hustler narrative.

“The Ksh 6,000 promise by Raila is a real game-changer and has greatly pushed William Ruto off balance. Raila is promising a definite figure while Ruto is giving a promise with his bottom-up economic model. It is difficult for anyone to ignore real figures,” Former Dagoretti North MP and co-chair of BBI Secretariat Denis Waweru observed.

More than one-third of Kenyans live on less than a dollar every day and mostly depend on stipends from menial jobs to survive. A good number of these people are the youth, who also form the largest constituency of voters in the country.

A promise to give them cash, although unrealistic according to some experts, makes more sense to them than a mere promise to uplift their living standards through an amorphous economic model with no known record of success.

“We will ensure that every needy household gets KSh 6, 000 monthly under our social welfare programme…those who are doubting should wait and see how we will do it.

Even in 2002 when we said we will give free primary education some doubted, did it happen or not? Posed the ODM boss.

So evident is Raila’s growing popularity among the youth that Ruto’s camp appears to have shifted focus from selling their bottom-up economic model to confronting and discrediting the former premier’s policy.

Initially, the DP’s camp hopped from one part of the country to another challenging Raila to stop discussing the viability of their bottom-up economic model and find an agenda to sell to Kenyans.

Today, they appear to have abandoned their own agenda and are focusing on discussing Raila’s social welfare programme.

In a recent interview with Kalenjin radio stations, the ODM leader noted Ruto had started feeling the heat after his entry into the race.

“He has been campaigning alone since 2017 and now that some competitors have joined the race, he is feeling the heat, ” said the former premier.

Political analyst Herman Manyora concurs that Ruto’s hustler narrative has been punctured and can no longer serve the intended purpose.

“The hustler narrative has been completely destroyed and rendered useless, it won’t be helpful anymore.

Ruto and his team will have to go back to the drawing board to come up with another strategy before it’s too late; if they don’t. then they should forget about this thing because it’s going, and you can see it going.