Jirongo said that lying is William Ruto’s biggest weakness and the reason why many politicians are finding it difficult to work with him.

Former Lugari MP Cyrus Jirongo has warned that Deputy President William Ruto is a lying politician, who can not be trusted by anyone.

Speaking in an interview on Radio Citizen, Jirongo who is Ruto’s former ally said that he has worked with him before, and has known the deputy president as a very cunning man.

Jirongo said that lying is William Ruto’s biggest weakness and the reason why many politicians are finding it difficult to work with him.

“He is my friend, but not honest. Those who know me, I started politics when I was still a young person, but I can not lie. If you want me to part ways with you, then start dirty and directionless politics,” Jirongo said.

The former Lugari MP said that Ruto’s cunning behavior has been confirmed by different politicians in Kenya.

“I am not the only one who holds that view. Is Uhuru Kenyatta lying when he says Ruto is not honest? Raila Odinga, Musalia Mudavadi, Kalonzo Musyoka, Martha Karua have all said the same. There is a reason, where there is smoke, there is fire,” he added.

In his campaigns, ODM leader Raila Odinga has been criticizing William Ruto, accusing him of being a liar and a corrupt government official.

On October 11, Raila took a swipe at William Ruto and President Uhuru Kenyatta for the fake promises they made in their 2017 campaigns.

Raila told the youths that unlike DP William Ruto, he will deliver all his promises if elected as Kenya’s 5th president.

He was referring to the free laptops to primary school children that Jubille promised in 2017, and the 9 stadiums that William Ruto said will be constructed across the country.

“To the youth, I have heard and listened to you across the nation. Sita wallet (I will not let you) down. I promise a better Kenya for you. 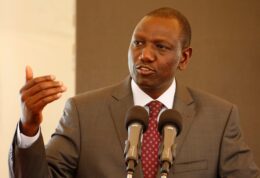