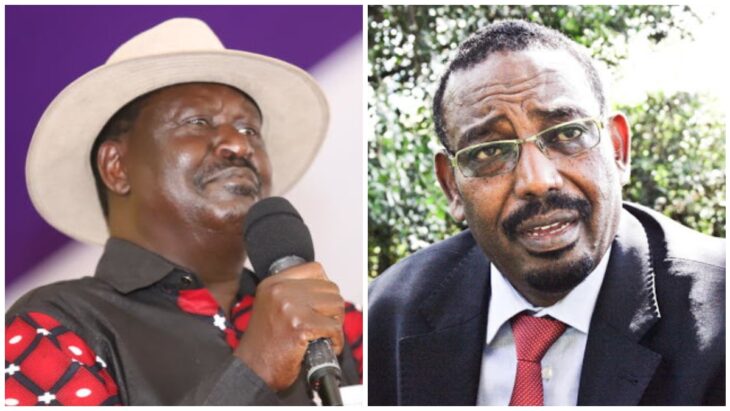 Former Ladgera Member of Parliament Farah Maalim has said it will be too hard for Raila Odinga to sell in Mt Kenya region in the 2022 General Election.

Former Ladgera Member of Parliament Farah Maalim has said that ODM leader Raila Odinga cannot be sold in the Mt Kenya region as a presidential candidate in the 2022 General Election.

Speaking on TV 47 on Monday, October 18, the former Deputy Speaker of the National Assembly said that ODM leader has been demonised in Mt Kenya for decades.

This, Farah believes, could deny Raila Odinga the support he needs from the huge voting bloc to make him the next president.

“It is very hard to sell Raila (Odinga) in Mount Kenya region because he has been demonised for years,” Maalim said.

According to Maalim, Kenya’s Deputy President is likely to succeed President Uhuru Kenyatta as he may scoop the lion’s share of the GEMA community votes.

“Right now William Ruto is better placed than anybody else to become the next resident of this country,” he added.

His comments come barely weeks after Nyandarua Governor Francis Kimemia revealed that Mt Kenya politicians were instructed to demonise the former Prime Minister just to make him lose the presidency to his competitor Uhuru Kenyatta in 2013 and 2017 General Election.

Kimemia however said the vote-rich Mt Kenya region now does not have any differences Raila who has been considered to be President Uhuru’s successor.

“My job was to insult Raila. We called him bad names. I do not even want to repeat here. It is time we go back to the people and tell them it was just politics and we insulted Raila for nothing,

“It’s time to tell Kenyans that all those negative things we said about Raila Odinga were just out just Politics,” the Nyandarua Governor told Mt Kenya tycoons.