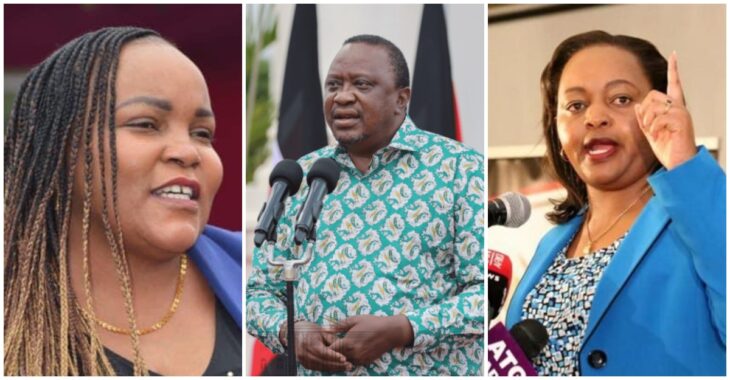 Kenya's President Uhuru Kenyatta has urged Kirinyaga leaders to unite and work together as a team to not only foster the development and prosperity of the county but also to calm Waiguru-Ngirici fights.

Kenya’s President Uhuru Kenyatta has urged Kirinyaga leaders to unite and work together as a team amid increases cases of political supremacy battles between the governor and woman representative.

President Uhuru who spoke on Monday, October 18, at Sagana in Nyeri County at a meeting with Kirinyaga leaders ahead of Wednesday’s Mashujaa Day celebration urged the duo to set aside their differences for the betterment of common Mwananchi.

He said the various multi-billion development projects being implemented by the Government in Kirinyaga, among them the Ksh 8.5 billion Thiba Dam, would help to transform the economy of both the County and the Country.

“We have fulfilled these projects because of the cooperation and peace among leaders which has ensured that we not only transform the lives of the residents of Kirinyaga but also all citizens of Kenya,” the president said.

Uhuru’s sentiments come barely two days after Waiguru-Ngirici fights went a notch higher after the duo exchanged words over the role their husbands are supposed to play in their political careers.

This was after Waiguru criticised Ngirici for failing to be her own ‘man’ in politics and instead relying on her husband’s support.

“The governor’s seat requires intelligence and a high ability to make key independent decisions that you can own up to,

“This is not family property but a public office where each of your actions counts and has to be critically evaluated before taking action,” she said.