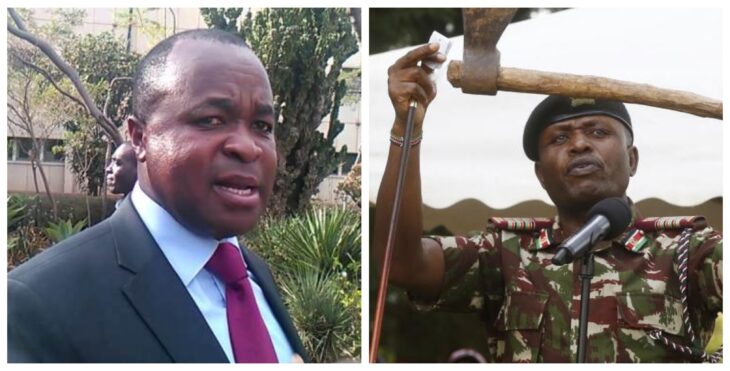 There was chaos in Trans Nzoia County after supporters of Kiminini Member of Parliament Chris Wamalwa and those of Rift valley commissioner George Natembeya locked horns at a funeral.

There was chaos in Trans Nzoia County after supporters of Kiminini Member of Parliament Chris Wamalwa and those of Rift Valley commissioner George Natembeya locked horns at a funeral.

According to a report by the People Daily, a scuffle ensued when Saboti parliamentary aspirant Joseph Pepela took to the podium to drum up support for Chris Wamalwa’s 2022 Trans nzoia gubernetorial ambition saying that Natembeya is an outsider in the county.

Speaking during the burial of a former councilor Ishmael Masinde at Lukhome Primary school ground in Trans Nzoia, Pepela pleaded with mourners not to get duped by Natembeya seeking to be governor in the county.

“We in Trans Nzoia are not ready for a governor who resides here (Trans Nzoia) but has a heart in Bungoma (county) where he hails from,” Pepela said.

Pepela’s remarks triggered taunts from Natembeya’s camp after which the two rival camps engaged each other prompting the MC to halt the funeral service to cool down the angry mourners.

However, things failed to get back to normal prompting the Salvation Army church to take the body of the deceased for burial in his compound.

Efforts by area Woman representative Janet Nangabo to calm down the mourners were futile forcing Ford Kenya Secretary General Chris Wamalwa to step in where he managed to calm the situation after an hour.

Wamalwa then invited his 2022 gubernatorial rival George Natembeya to address the crowd before he could conclude, but the commissioner turned down the offer.

One month ago, Natembeya declared that he will be contesting for the Trans Nzoia County gubernatorial seat in 2022 to succeed Governor Patrick Khaemba who is expected to retire in August 2022 after serving two terms.

“It is within my right to seek for the elective post if I wish to, I don’t think there is any law that bars me from contesting,” Commissioner George Natembeya said.

Commissioner George Natembeya declares he will be vying for governorship