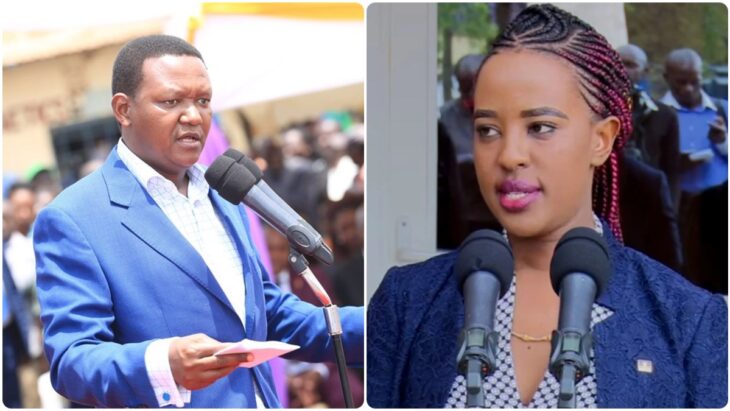 Former Machakos First Lady Lillian Nganga has said that Governor Alfred Mutua can be a great president if elected the fifth Head of State days after she claimed that the presidential hopeful wants to harm her.

Former Machakos First Lady Lillian Nganga has said that Governor Alfred Mutua can be a great president if elected the fifth Head of State days after she claimed that the presidential hopeful wants to harm her.

Taking to Instagram on Sunday, November 7, Lilian Ng’ang’a told Mutua’s social media team to focus on helping the presidential hopeful ascend to power rather than going after her and her new flame, Juliani.

“I advise you to concentrate on making him (Alfred Mutua) president. He would be a great president,” she said.

Last week, Alfred Mutua’s ex-wife said the county boss was using his aids to frustrate her.

In a press conference with her lawyer Philip Murgor on Thursday, November 4, Ng’ang’a said Mutua together with his personal driver Martin Nzinghi fraudulently reposed her motor vehicle registration number KBY 186G, a car which is fully registered in her name.

“Mutua accompanied by his police bodyguard, Martin Nzinghi arrived at my apartment parking lot at Kileleshwa, Nairobi, and without my knowledge or consent and using a spare key which he had illegally obtained, drove away from my personal motor vehicle KBY 186G, a car which had been fully registered in my name since 2014,” she said.

Ng’ang’a has however advised Mutua’s team to get off personal wars and focus on their work.

“You seem to forget that I know all of you and how you guys work. I saw you guys as you were being hired,

“You continue to be used and misused to fight personal wars that have nothing to do with you. shame on you all,” she added.

In June 2021, Lilian who recently revealed that she is dating rapper Juliani announced that they agreed to part ways amicably.

“I decided to end my long-term relationship with Alfred Mutua. We had a good run and I’m forever grateful to God he brought us together. We remain friends,” she said.