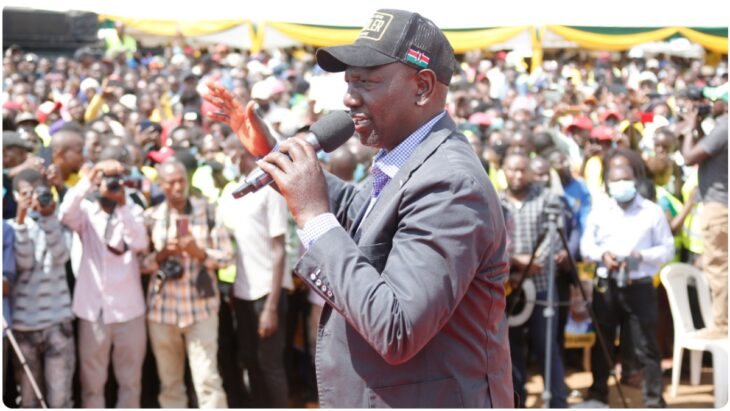 A study conducted by TIFA pollsters has revealed that many Kenyans view Deputy President William Ruto as a strong critic of Uhuru’s government. Photo: William Ruto/Facebook

Deputy President was forced to cut short his address to residents of part of Kisumu county on Wednesday, November 10 following violence in Kondele area.

It has since emerged the DP had been properly briefed and was warned against going to the area by police officers who had intelligence of impending violence.

Kivumbi.co.ke understands police had intelligence tensions had been fuelled in the area over alleged distribution of campaign logistical funds to local groups in the Kondele area.

“This intelligence was promptly shared by police officers to Deputy President William Ruto’s team with a recommendation to skip the rally,” read a statement from police seen by Kivumbi.co.ke.

During the violence, police reacted swiftly and the deputy president whisked away with no one on his tea sustaining any serious injuries.

Some vehicles on Ruto’s tour were however damaged in the ensuing melee.

“No barrier will stop the Hustler Nation from putting more oxygen into our economy. We will engage every Kenyan so that we can agree on what to prioritise in our manifesto,” William Ruto said after the violence in Kondele.

William Ruto is in Nyanza on a 5-day campaign trail ahead of the 2022 General Election and the police statement confirmed the security apparatus is fully aware of his itinerary throughout the five days.

Many Kenyans took to social media to express mixed reactions to the development with some condemning the political intolerance displayed by the violence in Kondele, one of Raila’s strong support bases in Luo-Nyanza.

Politicians perceived to be strongly against Riala Odinga always find it hard to successfully address gatherings in several parts of Luo Nyanza -including Migori and Kondele.

In September 2021, violence erupted at a political event staged by ODM presidential ticket contender Jimmy Wanjigi who was on his tour of Nyanza.

However, the meeting failed to kick off after rowdy youths armed with stones and other crude weapons invaded the venue beating delegates who were seated.

Politicians who incite Kenyans to be denied travel documents