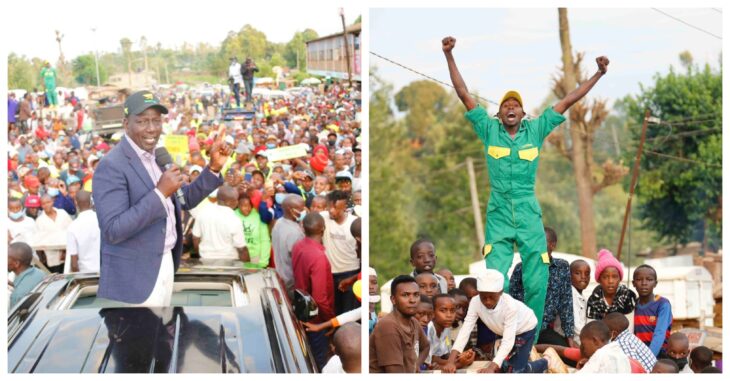 Deputy President William Ruto has defended youths who were arrested for heckling him during his rally in Kisii County on Wednesday, December 8.

A section of youths disrupted deputy president William Ruto’s rally as he campaigned in mt Kenya region over the weekend.

The youths disrupted the deputy president’s rally, saying wheelbarrows (which is the United Democratic Alliance party’s symbol) are scams and they are firmly behind President Uhuru Kenyatta and ODM leader Raila Odinga.

Amid the chants, the enraged crowd appeared to be supporters of several different political factions.

As some sang ODM and Jubilee chants, others could be heard praising UDA, a party William Ruto has said he will use to vie for the presidency in 2022.

This prompted Ruto’s envoy to leave the area without addressing the crowd.

Nyeri seems to be a hotbed for the deputy president since he experienced the same hostile reception on September 5 2021.

When Ruto’s motorcade was crisscrossing the Naro Moru area, angry youths pelted stones at his vehicles.

The same hostility was witnessed during William Ruto’s rally in Kondele area, Kisumu County on November 10.

The DP blamed his opponent Raila Odinga for masterminding the violence against him by paying youths to do the job.

The recent hostility on Sunday came amid William Ruto’s rally that was part of his tour in the Mt Kenya region.

Before the hostility in Nyeri, Ruto had been to Murang’a and Kiambu Counties to drum up support for his bottom-up economic approach.

In his tour of Kiambu County on Saturday, November 13, William Ruto urged residents to support their own instead of Raila Odinga who is imposed on them.

“Out of the eight million voters in Mt Kenya, you want to tell us that we do not have one among us who we can support to become president to the extent they have to bring us Raila? We should not wait to be given Raila but plan on our own,” said Ruto in Thika.