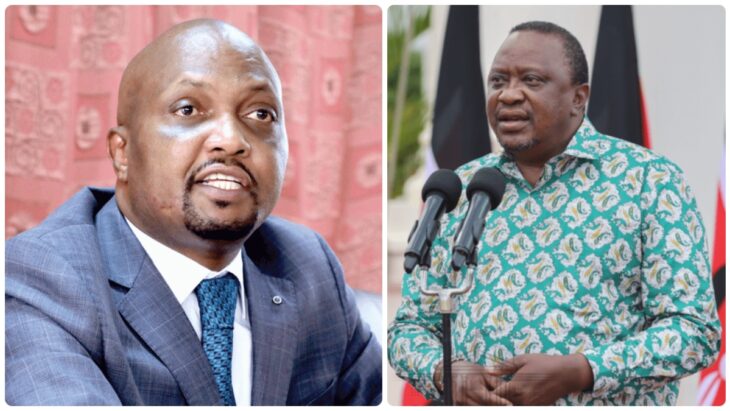 Gatundu South Member of Parliament, Moses Kuria has taken a swipe at President Uhuru Kenyatta for not mentoring leaders from Mt Kenya region.

Gatundu South Member of Parliament, Moses Kuria has taken a swipe at President Uhuru Kenyatta for not mentoring leaders from Mt Kenya region to take after him when he proceeds to retirement.

Taking to his social media handles on Sunday, November 14, the legislator accused the first in command who is expected to retire in August 2022 of killing many a Mt Kenynya political career.

“I have been pondering over an issue that just refuses to go away. This is about Mt Kenya leadership. The region has become an altar where many careers are sacrificed,” Moses Kuria said.

Unlike former President Jomo Kenyatta and Mwai Kibaki who mentored several Mt Kenya leaders to take over from them when they retire, the Chama Cha Kazi party leader said President Uhuru Kenyatta is responsible for the dwindling career of the majority of the Mt Kenya leaders including former CS Mwangi Kiunjuri.

“One of the only two Cabinet Ministers Uhuru Kenyatta had the guts to fire throughout his 10 years in power, the self-made Kiunjuri is back to the Laikipia ashes where he rose from,” Kuria said.

The outspoken legislator noted that Kiunjuri is not the only victim, but other leaders including former MP Paul Muite, Narc Kenya party leader Martha Karua as well as Gitobu Imanyara.

“Martha Karua is struggling to raise her head in a crowded crowd. Paul Muite’s political career withered like a failed crop before harvest,” Kuria stated.

“Anyang’ Nyong’o and James Orengo are still going strong even when Raila Odinga had all the powers he needed to vanquish them into smithereens. They now co-exist in leadership alongside youthful leaders like John Mbadi and Edwin Sifuna,” he added.