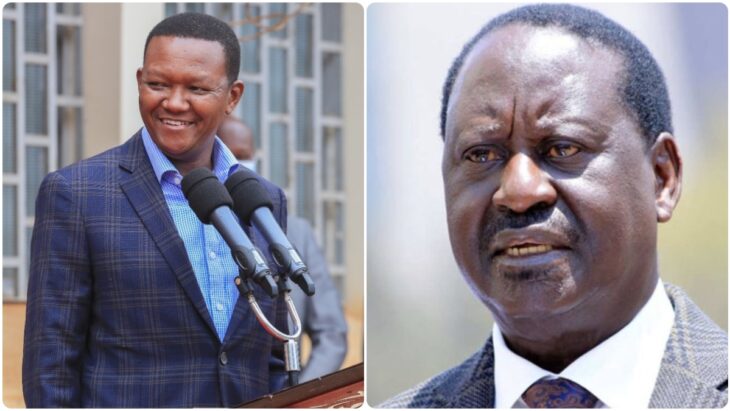 Machakos Governor Alfred Mutua has said he is ready to drop his 2022 presidential ambitions for ODM leader Raila Odinga.

Machakos Governor Alfred Mutua has said he is ready to drop his 2022 presidential ambition for ODM leader Raila Odinga.

Speaking after holding a meeting with party officials on Tuesday, November 30, the Maendeleo Chap Chap party leader said he will back the ‘Azimio La Umoja’ push spearheaded by former Prime Minister Raila Odinga.

Mutua, who has recently been at the forefront of Raila Odinga’s rallies said among all the presidential hopefuls him included, it is only the opposition leader Raila Odinga who is capable of changing this country for the benefit of the commoners.

“We are a party that believes in changing the lives of the less privileged Kenyans. We have looked around and the only person we believe can change this country is Raila.

“He has been there and we know once he ascends to power he will make Kenya a better place,” Governor Mutua said.

As part of the pre-coalition deal with the ODM party ahead of the crucial 2022 presidential elections, Mutua said his party will soon launch a manifesto, which they will share with Raila Odinga.

“We are not going to work with Raila just blindly. This week we will be launching our manifesto, which we will later hand over to the former Prime Minister in January during our National Delegate’s Conference,” Mutua stated.

This happens barely a week after the county boss who is serving his second and last constitutional term expressed optimism that the ODM leader will support his 2022 presidential bid.

In an interview with Citizen TV on Thursday, November 18, Mutua said he has worked with former Prime Minister Raila Odinga and that he hopes the opposition leader will throw his weight behind him.

“We have worked together and you will see more coalitions coming together and people joining hands… When push comes to shove I hope Raila Odinga will support me (for the presidency),” Governor Mutua said.