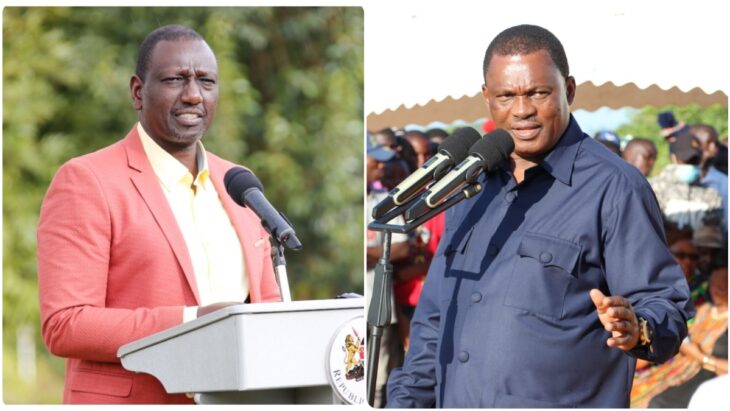 National Assembly Speaker Justin Muturi has warned Mt Kenya region and Kenyans as a whole against voting for the deputy president saying electing William Ruto will be a great mistake.

National Assembly Speaker Justin Muturi has dismissed talks of deputizing other presidential candidates ahead of the 2022 General Election.

This comes at a time the presidential underdog is being highly considered to be the perfect number two for presidential front runners Raila Odinga and William Ruto.

Taking to his social media on Friday, December 3, the presidential hopeful insisted that he will battle for the presidency with ODM leader Raila Odinga and Deputy President William Ruto.

“I can never be anyone’s running mate, so those who are telling me to deputize someone should stop and know I’m this race without turning back,” he said in a Tweet.

With barely months to the 2022 polls, the presidential hopeful said he will soon be unveiled as the Democratic Party flag bearer.

“Soon I’ll be unveiled as the Democratic Party flag bearer,” he added.

Muturi who recently made public his wealth ahead of his 2022 presidential battle with opposition leader Raila Odinga and the deputy president was endorsed by Mt Kenya East.

Led by Meru Governor Kiraitu Murungi, Mt Kenya East which comprises the Ameru, Mbeere, and Aembu communities described Muturi as a symbol of unity for the entire GEMA region and asked leaders from the populous region to back his ambition for the top seat.

“We are not ashamed to say that Muturi belongs to us and is our anointed leader. Bring us together as we look at the future. We believe that whatever formation or government, Mt Kenya has to be in it,” said Meru Governor Kiraitu Murungi.