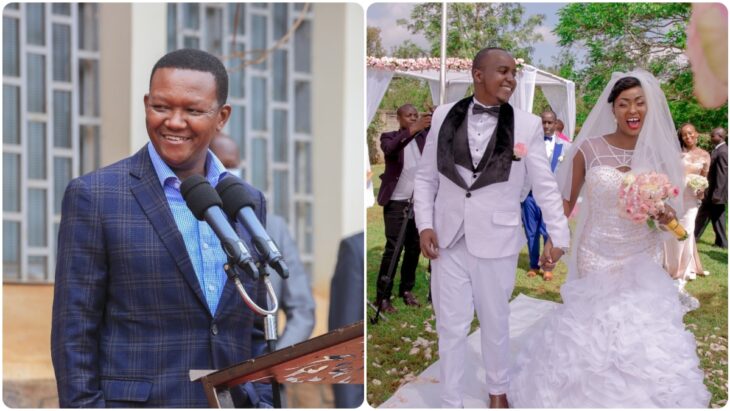 Machakos Governor Alfred Mutua has pledged a loan of between KSh500,000 and KSh 1 million to newly married couples if he is elected the fifth president.

Machakos Governor Alfred Mutua has pledged a loan of between KSh500,000 and KSh 1 million to newly married couples if he is elected the fifth president in the forthcoming 2022 General Election.

In his 13-point manifesto dubbed ‘Fresh na Mutua’ unveiled on Sunday, December 5, the Maendeleo Chap Chap party leader said the credit would be payable in 20 years with a 0.5 percent interest rate.

The presidential hopeful said the money would help the newlyweds to invest in their new homes and enrich their family situation countrywide.

“This will be as a gift for them to invest into their new home and entrench the family institution,” Mutua said as he began his march to State House.

To Counter ODM leader Raila Odinga’s Azimio la Umoja and Deputy President William Ruto’s Bottom-Up economic model, Mutua also suggested that employers should pay their employees after every two weeks instead of at the end of the month, a move he said would improve the economic situation of the country.

“I want us to introduce economics of broadening the base by paying our employees twice a month to increase circulation. That way, people can manage their money,” Mutua said.

The county boss who is serving his second and last constitutional term said he would go all the way to the ballot despite having endorsed former Prime Minister Raila Odinga’s Azimio la Umoja movement.

He said that he was driven to run for the presidency after being approached by numerous Kenyans, including youth.

“I supported the idea by Raila but that doesn’t stop me from vying for president. Why not ask why Raila attended Wiper delegate’s conference hosted by Kalonzo Musyoka who is also running?” he posed.

The governor further took a dig at his competitors asking them not to copy his ideas and instead come up with their own “as leaders running for president must be original.”