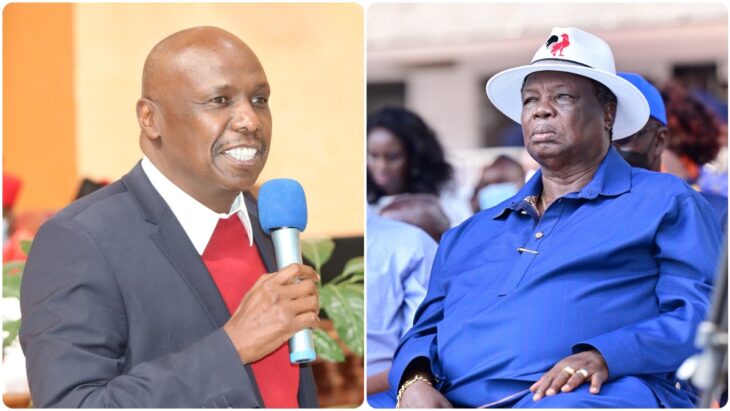 Speaking during Raila’s declaration event on Friday, December 10, at the Kasarani Stadium, the vocal unionists thanked Baringo Senator for honoring Raila’s invite adding that he will not leave him under the One Kenya Alliance.

“I thank my party leader Gideon Moi for coming here today… I guarantee we will not leave him in One Kenya Alliance. We will go with him to Baba (Raila Odinga),” Atwoli said.

While assuring the former Prime Minister Raila Odinga that he will support him in his bid because he has promised to improve the working conditions for Kenyans, Atwoli further took a swipe at Deputy President William Ruto stating that he is unqualified to become the president.

“In 2014, I was the first to tell people that this young man William Ruto cannot lead Kenya,” he added.

On his part, Moi who is the only One Kenya Alliance principals who honored Raila’s invite said he came to Raila’s big event because of the respect he accorded him and the Kanu party.

“I’ve come to Raila’s ‘Azimio La Umoja’ convention because of the respect he accorded me and KANU Party,” he said.

The Baringo Senator who is eying to fly the OKA flag in the 2022 presidential election further said that both ODM and OKA have one common goal.

He said just like Raila, the OKA is the other only option that Kenyans can trust with their families, security, quality education as well as food security.

“Who will you trust with your family, your security, your education, and your national resources? You can only trust Raila Odinga, and those who are in OKA,” Gideon Moi said.