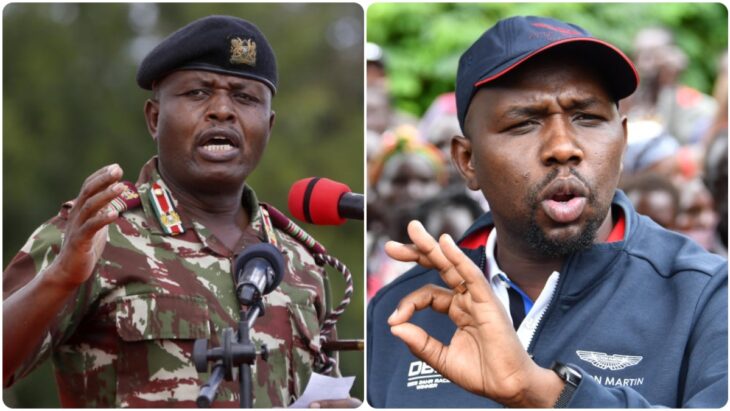 Murkomen who had accompanied Deputy President William Ruto to campaign ahead of his titanic battle with ODM leader Raila Odinga in Trans Nzoia County on Monday, January 3, said Natembeya is a dictator hence does not fit to run a county government.

“I want to plead with you the people of Trans Nzoia, please don’t make a mistake of electing Natembeya. If you make that mistake, I can assure you, you will have to kneel before him to get county services,” Murkomen said.

While accusing the regional commissioner of harassing and jailing innocent youths, the former Senate Majority Leader said he will pitch a tent in Trans Nzoia County just to ensure Natembeya does not succeed outgoing Governor Evans Khaemba.

“You’ll see me camping in this county campaigning for UDA’s candidate because we cannot risk having a dictator in a democratic country,” he stated.

Natembeya is seeking to succeed Governor Khaemba who is serving his second and last constitutional term on a DAP-K party.

The regional police boss is expected to compete against the Legal Advisor in the office of Deputy President Abraham Sing’oei and Maurice Kakai Bissau who is the Infrastructure and ICT advisor in the same office who are both seeking the UDA ticket.

Others who have expressed their interest in the Trans Nzoia gubernatorial race are Kiminini Member of Parliament Chris Wamalwa, Philemon Samoei, Teresa Metto, and Julia Kichwen among others.

On Monday, January 3, Natembea dismissed his perceived main challenger Chriss Wamalwa as inexperienced and told him to vie for the Member of County Assembly instead.

“If we are looking at experience, I have 25 years, and you (Chris Wamalwa) have 10 years. If we have all decided that there is a problem in Trans Nzoia, then it will mean, because of my 25-year experience, I will contest for governor and you contest for MCA,” Natembeya said.