Francis Atwoli: William Ruto will not get a single vote in Western Kenya 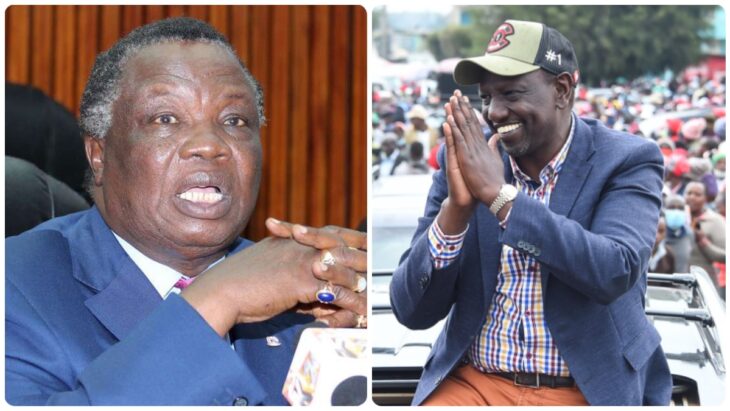 COTU Secretary-General Francis Atwoli has said that Deputy President William Ruto will not get even a single vote from the Western region despite his many trips to the predominantly Luhya region.

“Even if William Ruto visits Western Kenya 20 times, he will not get a single vote from there. Western Kenya is locked for Azimio la Umoja,” Atwoli said.

While refuting claims by William Ruto that he is among the Deep State working to ensure the deputy president does not take an oath of office even if he wins, the flamboyant trade unionists further insisted that Ruto will never be the next president.

The outspoken Trade unionists further said William Ruto himself is among the ‘system’ that massively rigged the 2013 General Election only that this time around, the ‘system’ will work against him (Ruto).

“William Ruto is the Deep State but he will not win (the August 2022 presidential race),” Atwoli maintained.

His remarks come at a time when the deputy president has lined up a series of political rallies to woo the Western region that has in the recent past voted for his main challenger Raila Odinga.

Since Monday, January 3, the deputy president has pitched tent in the region where he is expected to carry out dozens of political rallies ahead of the August 9, General Election.

On Tuesday, January 4, the deputy president toured some parts of Trans Nzoia and Kakamega Counties where for the second time, he pleaded with ANC leader Musalia Mudavadi and his Ford Kenya counterpart Moses Wetang’ula to back his presidential bid.

However, Atwoli said the Azimio la Umoja team will soon start touring each and every county in the Western region to reverse the little gains Ruto would have made.