Why Kalonzo, Mudavadi, Wetangula and Gideon Moi could soon divorce 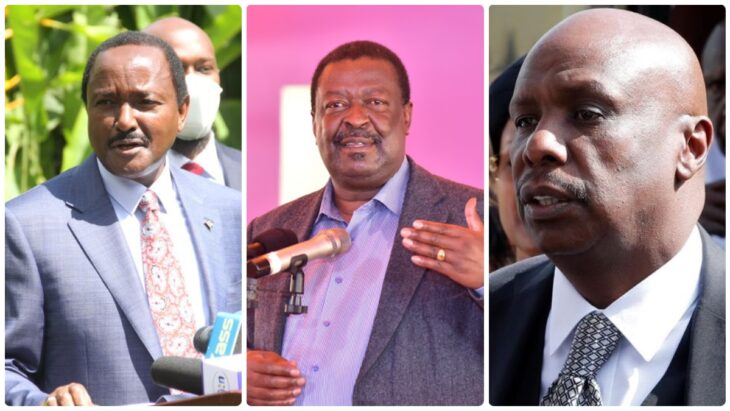 Kakamega Senator Cleophas Malala has claimed that the “earthquake” of ANC leader Musalia Mudavadi has claimed two causalities as the race to State House intensifies.

The nascent One Kenya Alliance (OKA) seems to be headed for an early divorce as suspicion continuous to deepen in the alliance.

There have been rumors that the principals of the alliance are leaning towards either Deputy President William Ruto or the Orange Democratic Movement (ODM) leader Raila Odinga.

From the beginning Kanu supremo Gideon Moi has been accused by some quarters of the alliance as being an agent of former Premier Raila Odinga who is enjoying the support of President Uhuru Kenyatta.

The recent report by UDA secretary-general Veronica Maina, which pointed out that UDA has formally invited the Amani National Congress (ANC) leader Musalia Mudavadi and his Ford Kenya counterpart Moses Wetangula for talks over working together towards the next election has elicited more distrust within the alliance.

While appearing at an event hosted by Kakamega Senator Cleophas Malala, a close ally of Mudavadi, the Deputy President alluded to the fact that he is ready to engage with the ANC leader in an effort of forming the next government.

“Do you want me to talk to Mudavadi and Wetangula?… I have hard you and will look for them so that we can work together on this journey of forming the next government.” Ruto said.

On Tuesday, January 4, Mudavadi and Wetang’ula sent more signals of looming trouble in the alliance when they held a meeting in the absence of Wiper leader Musyoka and Gideon Moi.

ANC and Ford Kenya have been called out as the weakest link in OKA the KANU secretary general Nick Salat after the revelation of a formal discussion between UDA the two OKA leaders.

“What happens at night will be revealed in the daytime,” Salat said during an interview with one of the leading newspapers.

“OKA is not moving. We did one rally in November and another in December. We are not serious.” Savula said.

Musyoka in a recent interview remained opportunistic that the alliance will stick together and have front one presidential candidate.

“I can tell you we have no difficulty in OKA. I am sure we are going to agree and in good time,” he said.

Though OKA has not held a rally since late last year, Musyoka said that the principals would hit the ground running soon and that people should not be worried.

The fact the alliance is facing challenges cannot be denied. Some have alluded those challenges are both internal and external.

What remains to be seen is whether the alliance will be able to settle on a presidential candidate before the end of January as they earlier intimated or they will divorce sooner than later.