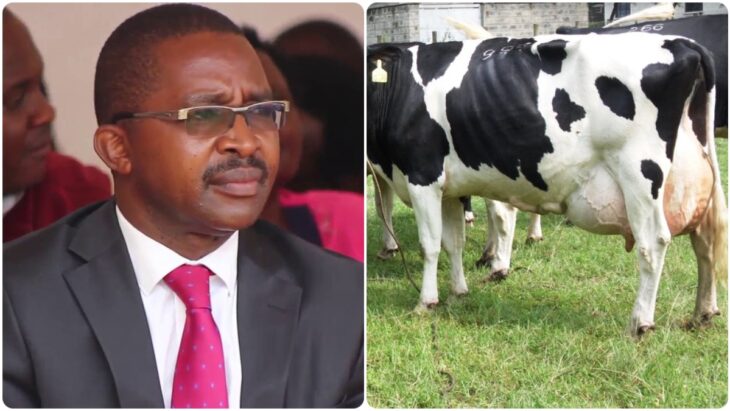 Presidential hopeful Mwangi Wa Iria has promised to ensure that all poor homes are provided with a dairy cow to boost their economic status if elected president.

Presidential hopeful Mwangi Wa Iria has promised to ensure that all poor homes are provided with a dairy cow to boost their economic status if elected president.

Speaking at Ihura Stadium on Wednesday, January 5, while issuing bursaries to more than 3,000 students drawn from boarding secondary schools the Murang’a Governor said the initiative dubbed “one home, one cow initiate” is the ideal solution to eradicate the skyrocketing unemployment crisis.

“Nikiwa rais, nitapeana ng’ombe kwa kila boma (I will give a cow to every poor home if I win the presidency), one home one cow,” Mwangi Wa Iria said.

Wa Iria who has declared his bid to vie for the presidency through his Usawa Kwa Wote party said a dairy cow is a long-term investment that provides milk for sale and consumption, and manure before it is eventually sold for meat.

The second term Governor said his administration started the “One Home One Cow Initiative” that sought to provide all poor homes in the county with a dairy cow, and that the end results have been tremendous stating that he intends to expand the initiative countrywide.

“That will be a law that every home that does not have a cow is provided with one. That is why my party’s symbol is a cow,” he said.

The Governor further dismissed claims that the presidential race will be about a two-horse race.

He said he will hit the ground starting next month to counter progress made by his competitors in the vote-rich Mt Kenya region.