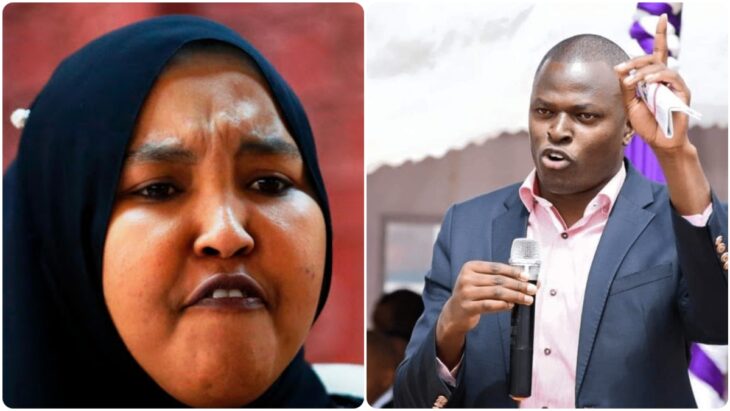 Nyoro, a close ally of Kenya’s Deputy President William Ruto was kicked out of the House by temporary speaker Soipan Tuya after he failed to substantiate his allegations.

“(Ndindi) Nyoro, based on the standing orders 107 having misled the house. I order you be removed from precincts of parliament for two days,” she ruled in ejecting him.

During the third reading of the Political Parties (Amendment) Bill 2021, Nyoro insisted that Gedi was dishing out KSh 100k to each MP to pass the controversial Bill.

“This is an honorable House, and we make decisions based on persuasion and conviction. It is abhorrent to see Fatuma Gedi distributing KSh 100,000 to MPs to vote their way. We can’t have bribery happening here Madam Speaker in the full glare of the cameras,” said Nyoro.

The speaker further suspended Fatuma Gedi for one day for distributing “food in the chambers.”

“I want to call your attention to standing order 107 which addresses orderly conduct in the House. On the same note, Fatuma Gedi be removed from the House for the remainder of the sitting,” the temporary speaker ruled.

During the heated debate, William Ruto allies suffered three defeats including a clause on the timelines of formation of coalitions before a General Election.

Allies of the DP further lost a bid to have political parties in a coalition allowed to field their candidates for seats other than that of the president.

MP Bunyasi had proposed amendments that would allow coalitions to only field presidential candidates but individual member parties be allowed to field candidates for other positions, according to the Star Newspaper.

In yet another defeat, allies of DP Ruto were unable to block Majority Leader Amos Kimunya’s bid to have clause 8 considered as part of the bill.

When the amendment was put to vote, Raila-Uhuru allies trounced the DP’s camp by 153 votes to 53.