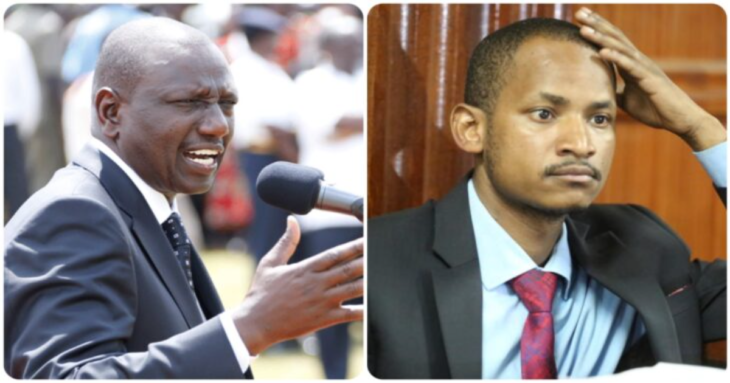 Speaking on Friday, January 7, at the Bomas of Kenya during ODM leader Raila Odinga’s 77 birthday celebrations, the outspoken legislature exuded confidence that his party leader will succeed retiring President Uhuru Kenyatta to officially push Ruto into the opposition.

While delivering his goodwill message to Raila, the controversial lawmaker prayed that Raila stays healthy, grows with more wisdom, and gets joy as he helps solve Kenyans problem so that he can get the joy he has been wanting.

“May the almighty grant you good health so that you lead Kenya. May he grant you the wisdom that you rule this 2022. And may the same almighty never forget about Ruto, May he make him the resident of Kenya…

“May the almighty make Ruto the chief opposition leader in 2022. You are the greatest there was, there is and there will be…You are the vintage, the hope to the hopeless,

” Baba has taken an oath registered in heavens until Kenyans problems are solved and he will have joy,” said Babu owino during Raila Odinga 77 birthday celebration.

Owino’s sentiments come just a day after Suba North Member of Parliament Millie Odhiambo said that UDA, a party heavily linked to William Ruto is preparing to be in the opposition.

According to Odhiambo, Tangatanga MP’s for the first time in parliament acted the role of opposition since she joined parliament.
“They have been talking to us saying they have numbers, the only numbers they have are telephone numbers. When we have defeated them here on issues that are not constitutional, they say they are moving to court,

“For the first time I saw Alice Wahome singing Bado Mapambano… I heard them say Tibim! I heard the asking us to be mindful that we are a house that needs to make laws for posterity, “Said Odhiambo after the Azimio side won the controversial Political Parties (amendment) bill 2021.