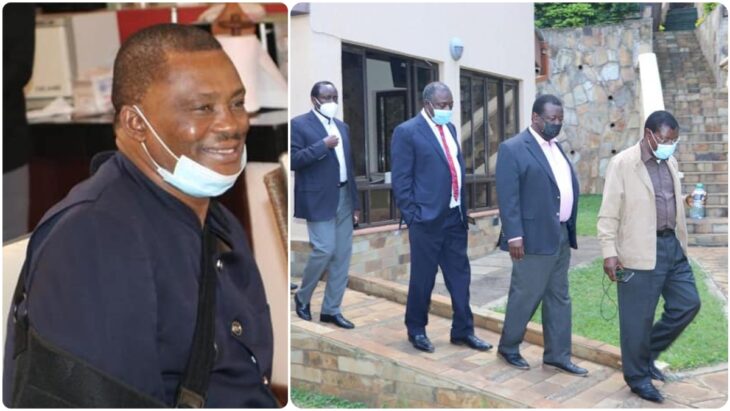 Muturi, who had vowed to give ODM leader Raila Odinga and Deputy President William Ruto a run for their money made the declaration after OKA principals Kalonzo Musyoka (Wiper), Musalia Mudavadi (ANC), Moses Wetang’ula (Ford-Kenya) and United Democratic Party’s (UDP) Cyrus Jirongo paid him a courtesy call at his Nairobi home, on Thursday, January 6.

Muturi, who is allied to the Democratic Party of Kenya (DP) said his decision to join the third force alliance was aimed at uniting the country ahead of the much-awaited August elections.

“Going forward, we will be working together for the benefit of this country. We need to maintain peace knowing that there is a tomorrow,” Speaker Muturi said.

Muturi’s joining OKA comes at a time when the coalition seems to be headed for an early divorce as suspicion continuous to deepen in the alliance.

Although the coalition maintains that it is intact, there are speculations that the principals are divided on whether to join Deputy President William Ruto’s Bottom-Up economic model or ODM leader Raila Odinga’s Azimio la Umoja.

While KANU supremo Gideon Moi has been accused by some quarters of being Raila’s mole in the coalition, Bungoma Senator Moses Wetang’ula and ANC leader Musalua Mudavadi appear to be leaning towards the deputy president, if the recent statement by UDA Secretary-General Veronica Maina is anything to go by.

Ruto has been persuading the two OKA principals to join his Tanga Tanga brigade to form a formidable and winning team to face Raila and William Ruto.