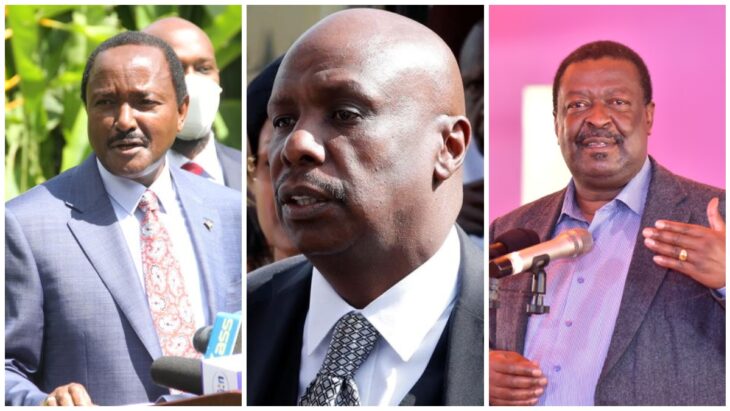 The One Kenya Alliance (OKA) retreats for three days in Naivasha with the aim of agreeing on the formula for selecting its presidential flag bearer.

The One Kenya Alliance (OKA) retreats for three days in Naivasha intending to agree on the formula for selecting its presidential flag bearer.

The retreat that begins on Wednesday, January 12, will see the OKA technical committee prepare a strategy paper on several issues including nomination criteria.

ANC party leader Musalia Mudavadi, Wiper’s Kalonzo Musyoka, Gideon Moi of Kanu, and Ford Kenya leader Moses Wetangula are expected to adopt the recommendations of the technical committee on the matter of picking a presidential flag bearer on Friday, January 14.

The formula for picking a presidential flag bearer has been the standing block for them delaying to name one.

OKA’s technical team has a hard task if establishing a compromising formula as they need to protect the alliance which currently has internal challenges emanating from suspicions.

Last week the One Kenya Alliance leaders assured their supports and the Kenyans at large that they are united and they will be naming their preferred candidate before the end of January.

“We wish to make it clear that our unity is paramount, and that we believe in a united Kenya. Our supports should not worry, as we are going to name a flag bearer after our retreat next week,” they said in a joint statement.

Mudavadi had last year promised that OKA will have identified a presidential candidate by early this year after some ANC MPs got concerned about the long delays. in naming a flag bearer.

ANC legislatures led by Kakamega Senator Cleophas Malala had given their leaders an ultimatum to name a flag bearer by end of December 2021.

The lack of a clear presidential candidate has slowed down the political activities of the coalition such as popularizing the outfit.