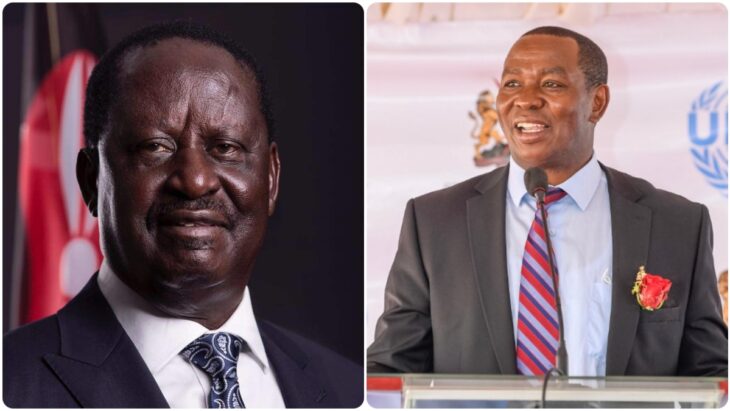 ODM leader Raila Odinga’s presidential campaign team says it targets to get at least more than half of Mt Kenya vote in the August 9, General Election.

According to Laikipia Governor Ndiritu Muriithi, who is also Raila Odinga’s chief campaigner, they will ensure the opposition leader defeats his rival Deputy President William Ruto in the vote-rich Mt Kenya region.

He said Raila could have won in the previous elections if he could have had the support of the Mt Kenya region.

“Raila has come close to winning without Mt Kenya in his previous presidential elections. As we speak, he is the leading candidate in Mt Kenya. I suspect he will get 60 percent from the region come August,” he said.

Muriithi, who said he will defend his gubernatorial seat on a PNU ticket, said that odds were looking good especially because more regions that had previously rejected his bid are on his side.

The move by President Uhuru Kenyatta’s handshake partner to get 60 percent of the Mt Kenya region will officially start in Thika.

This is after the former Prime Minister Raila Odinga said he will campaign in Thika on Saturday, January 15, as he embarks on this year’s campaign trail with 8 months to the election.

Odinga, who met a group of youth from Kiambu County on Tuesday, January 11, said the Thika meeting will bring on board other counties from the vote-rich Kenya region before a roll-out of the campaign to other regions.

“Jumamosi hii tunaenda Thika…we’re going to have our first public engagement in 2022 in Thika,” Raila who recently announced that he will be giving his fifth stab at the presidency said.

This will be Raila Odinga’s first rally for his 2022 presidential bid that is to be held in President Uhuru Kenyatta’s home turf of Kiambu County has been termed as symbolic by his campaign handlers as he maintains his push for support in the Mt. Kenya region.