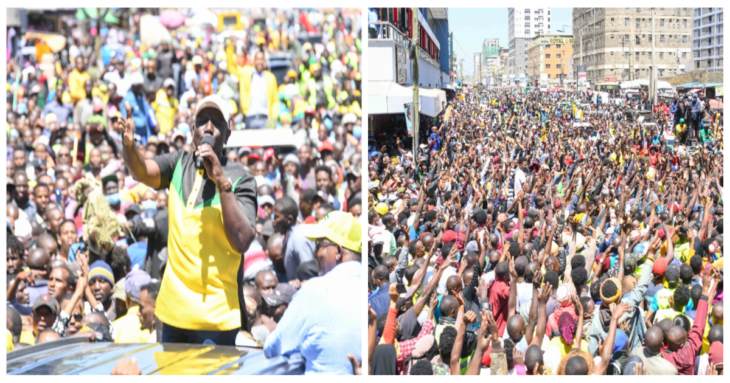 Deputy President William Ruto has promised a Ksh 5 billion kitty to Nairobi Business Community if he is elected as the fifth president of Kenya in the August 2022 General Election.

Speaking in his tour of Eastleigh, Nairobi’s busiest business center on Wednesday, January 12, the DP said that everyone shall get an opportunity to venture into business as his government shall build 20 New markets.

“The hustler government shall establish a KSh 50 billion annual kitty for small businesses operating in Nairobi County to cushion them against predatory lenders. We will ensure everyone gets a chance to engage in business in Nairobi. This will help them get upgraded,” said Ruto amidst loud cheers from his supporters

Ruto called on Raila to stop complaining about him helping people at the grassroots level. He said he will use government money to actualize the KSh 50 billion kitty to the business community.

“I heard Raila complaining that where am I getting money to give Bodaboda Operators and Mama mbogas. I want to tell him that this year I will give kSh 50 billion to the small-scale traders. That is government money,” added the DP.

The former Eldoret North MP also promised to fully implement the Big Four agenda by investing Ksh 100 billion in the housing sector, Agro-processing, Value addition, and Manufacturing to ensure the youths are employed.

Ruto’s Bottom-Up economic model which has been the basis for his presidential campaigns has been criticised by most of his critics among them his fiercest rival and former Prime Minister Raila Odinga, who argues that the model cannot revive Kenya’s economy.

The ODM leader has also promised a Ksh 6000 cash transfer to each struggling family, if he is elected president in August 2022.

According to Raila, the bottom-Up economy is meant to mislead to the youth into electing William Ruto.