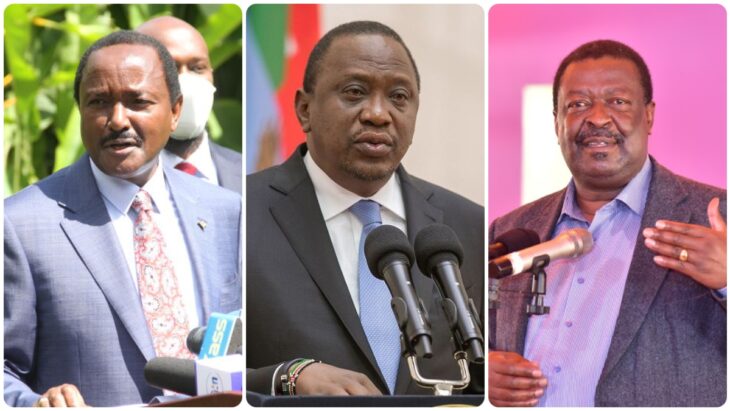 The effects of Musalia Mudavadi's highly anticipated earthquake brought far-reaching effects, as it marked the death of One Kenya Alliance and it rattled the State House.

Wiper leader Kalnzo Musyoka instead visited Mukuru Kwa Njenga where he donated foodstuffs to the victims of the demolitions while other OKA co-principals could not be traced.

Despite the leaders boycotting the meeting, President Uhuru Kenyatta maintained that he will persuade former vice presidents Musalia Mudavadi and his Kalonzo Musyoka to join the Azimio la Umoja.

Uhuru called on politicians to work together with a view of improving the lives of all Kenyans saying he will continue engaging with all leaders, irrespective of their political persuasions, so as to ensure that Kenya becomes a strong and united nation.

“I hope and pray that this spirit we have started with, we shall be able to carry on with it through till elections are over and for us to be able to bequeath again a new administration peace, togetherness, and a focus on the issues that affect the people of this Republic,” the President said.

Uhuru commended the over 200 legislators allied to the Kieleweke political wing for their efforts to pass the controversial Political Parties’ Amendment Bill 2021.

“Let me take this opportunity to thank you from the bottom of my heart for the commitment you’ve shown especially by those of you from the National Assembly national assembly during this holiday period,” he said.

The President, who was joined at the luncheon by former Prime Minister Raila Odinga, said the passage of the said the law is aimed at improving the country’s governance system and regretted that some leaders were demonizing the amendment for short-term political gain.

“And the political parties amendment that we are trying to push through which some people have tried to demonize as they demonized BBI. The bill is giving us an opportunity to be able to formally work together across political parties in the interest of the nation,” the President said.