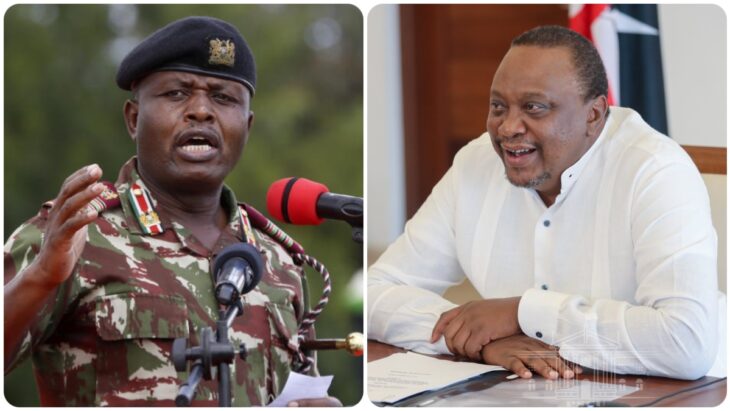 Trans Nzoia gubernatorial aspirant George Natembeya has been redeployed to the Office of the President (OOP) in Nairobi just hours after tendering his resignation.

On Wednesday, January 12, Natembeya who has expressed his interest to succeed rretiring Governor Patrick Khaemba resigned as the Rift Valley Regional Commissioner.

Speaking to the press in Nakuru, on Wednesday, Natembeya said the time has come for him to focus his energy on his ambition of becoming the next Trans-Nzoia governor.

But on Thursday, January 13, Kivumbi.co.ke understands that Natembeya has been moved to President Uhuru Kenyatta’s office to finish his 30-day notice period.

According to a press statement released by Interior Principal Secretary, Karanja Kibicho, on Wednesday, January 12, revealed that Natembeya has been replaced by Makueni County Commissioner, Mohammed Ahmed Maalim.

Natembeya replaces William Kangethe Thuku who has been working at the Office of the President.

Thuku was appointed Nairobi regional commissioner while Isaiah Aregai Nakoru, who was the Eastern Regional Commissioner, has been transferred to Western Region as the Commissioner.

Western Regional Commissioner, Esther Wamuyu Maina, has been moved to Central where she will serve in the same capacity.

After serving at the Office of the President for the next 30 days, Natembeya will take a short leave before hitting the campaign in Trans Nzoia County.

“From here I will go back to Nairobi to prepare myself and take a short leave before proceeding to Trans-Nzoia to heed to the calls of Wananchi to serve them as governor,” he stated during his address.

He is expected to square it out with Kiminini MP Chris Wamalwa, Trans-Nzoia Woman Representative Janet Nangabo, Abraham Sing’oei, and Maurice Bissau who both hold different positions at the office of Deputy President William Ruto.

Other competitors include Philemon Samoei, Andrew Wanyonyi, and Moses Khaoya.