One Kenya Alliance fails to name presidential flag bearer, ‘we still have time’ 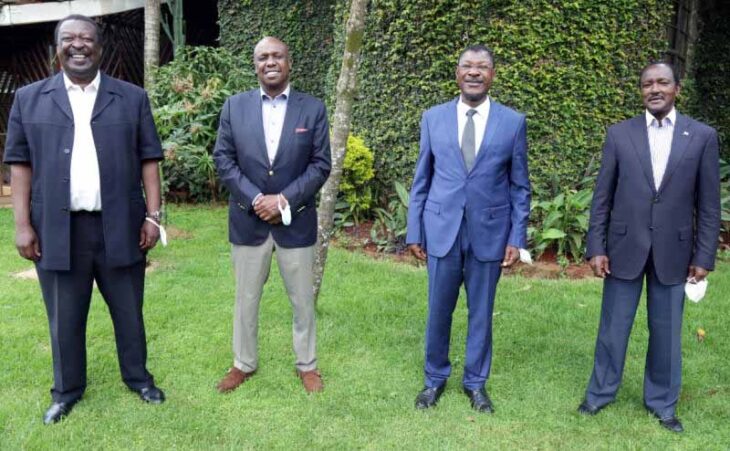 One Kenya Alliance Principals failed to agree on the criteria to settle on a presidential flagbearer ahead of the August 2022 General Election on Friday, January 14, the day they had promised to announce a flagbearer.

Speaking to the Press after a retreat in Elementaita, Nakuru county the same day, th principals remained firm that they are a team and called on Kenyans to be patient saying the agenda of unveiling the flag bearer and running mate is an exclusive duty of the coalition.

“The agenda of unveiling a flagbearer and a running mate is an exclusive duty and reserve of OKA, we want to encourage the media to be patient…we are likely to unveil our candidate at the end of January. We still have time,” said Ford Kenya Party leader Moses Wetangula.

Wetangula said they are near to settling on who will be their presidential candidate, calling on their supporters to continue supporting them.

He dismissed earlier reports by one of the technical committee members that had given a hint on what to expect.

“Let’s learn to assume those social media reports because as you have heard very soon we will announce the flagbearer and his deputy,” said Kalonzo Musyoka, a member of the coalition.

Earlier on Tuesday, January 11, the One Kenya Alliance officials had been set to name their flagbearer on Friday 14 after the technical team make a decision after a three-day retreat.

Their technical committee had a three-day retreat meeting in Elementaita Nakuru County, tasked with giving criteria for choosing the preferred candidate.

The committee had come up with Wiper leader Kalonzo Musyoka as the best option with Amani National Congress Musalia Mudavadi being his deputy.

The criteria used by the committee were the factors considered in the pairings included; the candidate’s ability to gurner and deliver votes, capacity to mobilize financial resources, regional representation, and negotiation skills if they decide to join other teams ahead of the General Elections.

ANC Party leader Musalia Mudavadi did not attend the meeting at Elementaita giving a hint of gaps despite them maintaining to be united.

On his Twitter account, he invited people for the NDC meeting on January 23 at the Bomas of Kenya.

“A storm is coming, who can you trust,” Musalia wrote on Twitter.