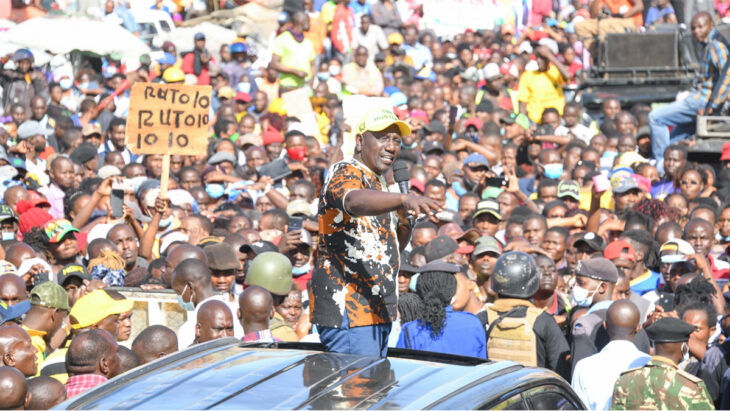 Deputy President William Ruto has promised to create 400,000 jobs for the youths if elected the president in the coming General Election

Deputy President William Ruto has promised to create 400,000 jobs for the youths if elected the president in the coming General Election.

Speaking on a tour of Kajiado North Constituency on Thursday, January 13, the DP said that the youths are not material for handouts but instead they are skilled, talented, and enterprising and, therefore need a sustainable plan and policy that will uplift them.

“That’s why my government will prioritize the investment of Ksh 100 billion in government projects that will generate more than 400,000 jobs for the youths annually. That’s that Hustler Nations commitment,” Ruto said amidst cheers from the crowd.

Ruto promised to fully implement the Big Four agenda which he was derailed by the BBI proponents hence stalling job creation by the Jubilee government.

“People of Kajiado do not let these people divide us. We have clear plans in our Bottom-Up blueprint but our competitors have no plans, they are only good at propaganda,” Ruto said in reference to his competitor Raila Odinga.

Ruto challenged youths to register as voters and take the opportunity and liberate the country in the coming August General Election.

He called upon youths to choose the right candidate in August, as there is a direct relationship between their future and their votes.

Presidential aspirants are pulling all stops to get youth votes as the youths in the country currently form the largest single voting bloc in the August election.