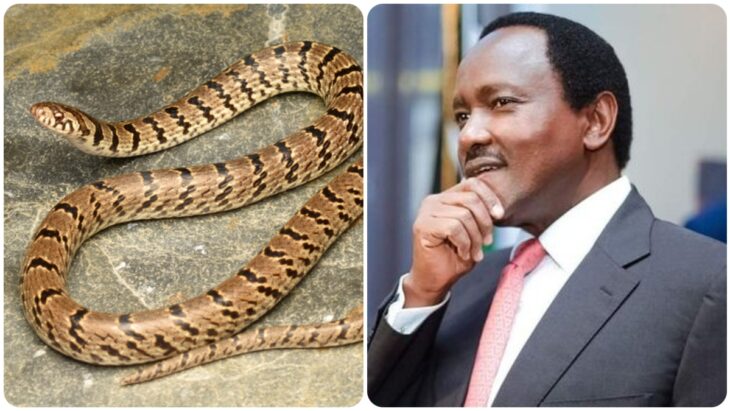 A snake temporarily interrupted a meeting that had been convened by Wiper leader Kalonzo Musyoka in Ukambani.

A snake temporarily interrupted a meeting that had been convened by Wiper leader Kalonzo Musyoka in Ukambani.

The One Kenya Alliance (OKA) co-principal had on Saturday, January 15, convened a meeting of political leaders drawn from the larger Ukambani region at his Yatta home.

When the guests had settled, the reptile appeared from nowhere leading to a stampede as some of the guests were forced to scamper for their safety.

However, a few brave ones rattled the serpent which slithered into the tent at around 12 noon.

The snake was later killed and one of the attendees took the remains of the reptile away before the meeting proceeded.

According to Makueni Senator Mutula Kilonzo Junior, the meeting by the former vice president is aimed at charting their political future as the country heads to the 2022 elections.

“Our meeting will be used to discuss the way forward for the community in regards to the political direction we shall take as we approach the national election,” a group of Ukambani leaders led by Makueni Senator Mutula Kilonzo Jr announced on Wednesday, January 12.

This comes at a time when Kalonzo Musyoka has emerged as the top candidate to be OKA flagbearer ahead of the much anticipated August 2022 General Election.

On Friday, January 14, one of the technical committee personnel revealed to Citizen TV that they already have come up with a report and three formations shall be put up for adoption, amendment, or rejection by the coalition.

Yesterday, Kalonzo Musyoka met with other OKA principals Gideon Moi (KANU), and Ford Kenya’s Moses Wetangula where they failed to agree on who should be the third force presidential flag bearer.

During the retreat at Elementaita in Nakuru County, ANC leader Musalia Mudavadi did not attend the meeting, suggesting that the sprouting coalition was headed for a breakup.